Copying and Pasting in SSH Session on Chrome OS

I turned on Apple Remote Desktop access on an eMac system running Mac OS X 10.4.11 by the following steps:

I went to Sharing again on the system and selected Apple Remote Desktop and then clicked on the Firewall tab. I clicked on the padlock icon so I could edit the firewall settings. I then saw a message telling me that I couldn't change the settings when I clicked on Edit.

You cannot change the firewall settings for this service.

I didn't see a reference to the default VNC port of 5900, so I opened a terminal window to check the firewall rules (Applications - Utilities - Terminal) using the ipfw command. The command has to be issued while logged into an account that has administrator access on the system.

I could see that connections to port 3238 were allowed, but there was no entry for port 5900, though the system was listening on port 5900 as a netstat -an command verified.

To resolve the problem, with the Firewall tab selected under Sharing, I clicked on the New button. I then selected VNC for Port Name, which automatically selected TCP ports 5900-5902 and UDP port 5900. 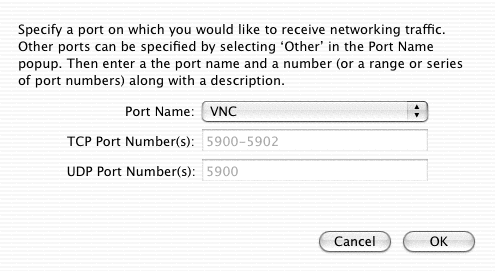 VNC then appeared in the list of services in the firewall window with a checkmark next to it. When I checked the firewall rules with the ipfw list command, I also saw ports 5900 to 5902 listed.

If you need a Virtual Network Computing client for a Chromebook, such as the one manufactured by Acer, RealVNC provides a free one that is available through the Google Chrome Web Store. For details on the app, see VNC® Viewer for Google Chrome™.

When I used it to connect to a Mac OS X system, I was warned that the connection would not be encrypted.

This connection will not be encrypted. Your authentication credentials will be transmitted securely, but all subsequent data exchanged while the connection is in progress may be susceptible to interception by third parties.

That's not a significant concern for me when both systems are on a Local Area Network (LAN) I control, but I normally tunnel VNC connections through an SSH connection when connecting over the Internet to ensure transmissions are encrypted.

Chrome OS on a Chromebook contains A Secure Shell (SSH) client application. To access it, hit the Ctrl-Alt-T keys simultaneously, which will open a terminal window as a tab in the Chrome browser. Type ssh at the "crosh>" prompt to access the ssh client.

Within the ssh application, typing help will show you a list of the available commands.

If you wish to encrypt a Virtual Nework Computing (VNC) connection by tunneling it through an SSH connection, you will need to specify a port from 8000 to 8999 as the port to be used for forwarding the VNC traffic when using SSH under Chrome OS. You can do so using a forward command such as the following:

Then using the RealVNC client for Chrome OS, you can specify 127.0.0.1:8000 or localhost::8000 as the address through which to establish the VNC connection. You could also have used forward 8000:localhost:5900 for the SSH forwarding command. The address 127.0.0.1 is the localhost address and with the port number of 8000 tells VNC to try establishing the VNC connection by connecting to port number 8000 on the system on which VNC is running, i.e., the Chromebook. Because there is an SSH tunnel through that port, SSH will route any traffic to TCP port 8000 through its connection to port 5900 on the remote system.

You will still get the warning from the VNC Viewer about transmissions not being encrypted when you tunnel the traffic through the SSH tunnel, but you no longer have to worry about the warning, since the traffic is going through an encrypted SSH tunnel. The VNC Viewer does not know that its transmissions are going through an encrypted tunnel; it only knows that it isn't performing any encryption.

A Mac OS X system that is functioning as a Virtual Network Computing (VNC) server can be remotely accessed using VNC client software that comes with the OS X operating sytem, which will allow you to see what appears on the screen of the system remotely and control that remote system just as if you were sitting at the system using its keyboard and mouse.

I've been having problems with my Chromebook after an update from Google this week. Periodically, I will lose the capability to view videos I've downloaded. A window will open for the video, but it won't play; clicking on the button to play the video will have no effect. Also, when I open the files application, it won't show the files in a directory. Shutting the system off and then restarting it can resolve the problem, though I then find that each time I do so, when I reopen the browser about half the previously opened tabs no longer appear. And, also, annoyingly, the last time I shut the system down and restarted it, about 1/2 hour's worth of notes I had taken in the Scratchpad app about 1/2 hour prior to shutting down the system had disappeared.

I checked Google Drive, but the particular Scratchpad note I had been editing wasn't there. Though Scratchpad had at one time been synchronizing between my Chromebook and Google Drive, it appeared it hadn't done so for quite some time.

I opened the Scratchpad app (version 3.1.0), which opened a new browser tab. On the left-hand side where a list of the notes I had created appeared there was also a "Scratchpad tips and tricks" note. I clicked on it; one of the options that appeared in the note was "Connect your Scratchpad to Google Docs." When I clicked on Connect, I saw that, under Options, "Sync with Google Docs" was set to "Off". I clicked on the option to change it and gave the application access to the Google Docs for my Gmail account. I then saw the option was set to "On". Hopefully, now I will have a copy of my notes on Google Docs should the problem reoccur. I recall once previously being asked what version of a note I wanted, the one stored locally or the one on Google Docs.

Note: you can also get to the setting to change the synchronization option by taking the following steps in the browser: