Using awk to sum numbers in a file

The awk command found on Linux/Unix and Mac OS X systems can be used to sum numbers in a file. E.g., suppose the file numbers.txt contains the following numbers:

The contents of the file can be piped into the awk command with the cat command and then summed by awk.

If you know the numbers always occur in specific colum positions in the file, e.g., in positions 10 to 15, you could also use the cut command instead of the cat command. E.g., if you file contained:

Managing Wi-Fi from the terminal command line under OS X

To manage Wi-Fi connections from a shell prompt on a Mac OS X system you can obtain a command line interface by running the Terminal program located in Applications/Utilities. From that command line interface, you can determine whether a WiFi interface is present on the system using the command networksetup -listallnetworkservices. You should see "Wi-Fi" in the list of services that appears when you issue the command.

To determine the hardware interface supporting Wi-Fi connections you can use the command networksetup -listallhardwareports.

In the case above, the Wi-Fi interface is en1.

To get information on the status of the system's Wi-Fi connection, you can use the command networksetup -getinfo Wi-Fi.

To find if the system is currently connected to a wireless network and the network name for the current wireless connection, you can use networksetup -getairportnetwork <device name> where device name is the network interface on the system that supports WiFi connections. E.g.:

If you wish to to turn the Wi-Fi connection on or off from a shell prompt, you can use the networksetup -setairportnetwork command.

On a Mac OS X system, such as a MacBook Pro laptop, you can detemine the available WiFi networks from a shell prompt, which you can get by running the Terminal program located in Applications/Utilities, by using the command below:

The SSID is the "Service Set Identification", which is a 1 to 32 byte string that represents the "network name". The SSID allows you to identify a network to which you may wish to connect. Sometimes a person setting up a wireless router may choose to not have the SSID broadcast. In that case you wouldn't see the SSID in the list even though the network is available for connections if you know the SSID.

The BSSID is the "Basic Service Set Identification". Each Basic Service Set is identified by a BSSID. For a BSS operating in infrastructure mode, the BSSID is the media access control (MAC) address of the wireless access point (WAP), which is generated by combining the 24-bit Organizationally Unique Identifier, which identifies the manufacturer, and the manufacturer's assigned 24-bit identifier for the radio chipset in the WAP. The BSSID is the formal name of the BSS and is always associated with only one BSS. The SSID is the informal human name of the BSS which is more easily remembered by humans.

You can determine the manufacturer from the BSSID by searching the IEE-SA - Registration Authority MA-L Public Listing. Take the first six digits of the BSSID and replace the colons with dashes and then put the result, which will be in the form of xx-xx-xx in the "Search for" field. E.g., in the case of the wireless network above identified as "David's Net", the BSSID is ec:1a:59:8d:dd:61, so you would search using ec-1a-59, which would show the wireless device was manufacturered by Belkin International Inc., a company that make wireless routers for the home market. For the network identified as "Norman Netgear", searching on 84-1b-5e shows the manufacturer is, indeed, Netgear.

Wikipedia pages can be edited by anyone; they can also be deleted entirely by Wikipedia administrators for a variety of reasons. Within the Wikipedia community there are differing views regarding the retention and deletion of articles, e.g., see the Wikipedia article Deletionism and inclusionism in Wikipedia. If you read an article and want to ensure you have access to the information in the future, the best course is probably to use Wikipedia's own "print/export" feature or to save the content of the article elsewhere by using a service such as Evernote, which provides notetaking and webpage archiving services, Diigo, which provides a social bookmarking service with the capability to store a copy of webpages you have visited, i.e., to "cache" them so that you can view the webpage again as it was when it was cached whether it has been changed or deleted in the interim, or similar services. But, if you haven't archived an article and find a Wikipedia page was deleted and so is inaccessible to you, there are still some options available to you.

Interestingly, though Wikipedia now contains a Deletionpedia article, that article was itself once deleted from Wikipedia.

Another site Fixed Reference: Snapshots of Wikipedia provides access to articles archived in April and July of 2004.

Because Fixed Reference and Deletionpedia only provide access to articles from two years, 2004 for Fixed Reference and 2008 for Deletionpedia, their usefulness for accessing deleted articles is very limited. Another alternative is to search the Internet Archive at archive.org. The Internet Archive is a non-profit digital library with the stated mission of "universal access to all knowledge." It also archives pages found on the World Wide Web (WWW). The archived pages, which are created for a website when the Internet Arhive periodically scans the site, are accessible through its Wayback Machine. The name is a reference to the time machine used by Mr. Peabody, a talking dog, and his human companion, Sherman, in the cartoon series The Rocky and Bullwinkle Show to visit famous events in history. You can choose to "Browse History" to search for an archived copy of the page deleted from Wikipedia, if you know its URL. If the page was archived by the Internet Archive multiple times over a period of time, which could span years, you can view the page as it was on the particular days it was archived.

Another place you can check for deleted Wikipedia pages or pages that have disappeared from any website is Archive.is, which aims to be "your personal Wayback Machine!" The site can be freely used by anyone to take a "snapshot" of a webpage that will always be online even if the original page disappears. So, if someone else has archived a particular webpage for which you are searching, you may find it at Archive.is. You can also use the site to archive pages you may want to access later that could disappear from the original site or to make the pages available should the original site disappear from the web.

I needed software that I could run on a system running Microsoft Windows 8 to help me manage projects and tasks. I had been using an online service for awhile, but was looking for software I could run on the system that would give me some additional capabilities, but I didn't want to spend several hundred dollars on Microsoft Project, which, though it offers all the features I might need, is overkill for my current needs. I found ToDoList, which is free to be an easy program to quickly start managing my projects and tasks.

Determine the date of manufacture of a Mac system

On my MacBook Pro laptop, running OS X 10.8.3, I can see the date it was manufactured by clicking on the Apple icon in the upper-left corner of the screen then selecting About This Mac and then clicking on the More Info... button. 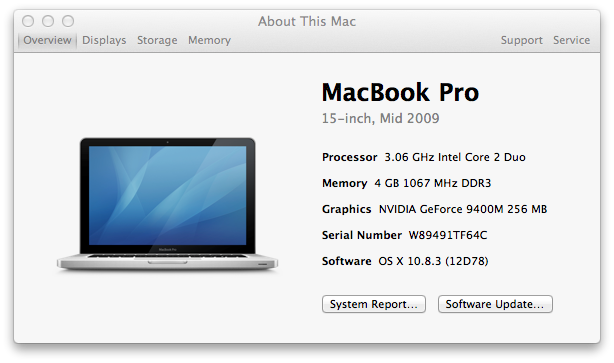 If you need to get the information from a command line interface, e.g., from a terminal or SSH session, you can't get it directly using the system_profiler command, but you can use information provided by that command to look up the information online.

You can use the model identifier information to look up information on when the model was manufactured using Lookup Mac Specs by Serial Number, Order, Model, & EMC Number, Model ID @ EveryMac.com.

If you just want the model identifier, you can use awk to isolate that information.

When I looked up MacBookPro5,3, I saw 3 entries with a "subfamily" of Mid-2009 15" listed for each. All 3 were introduced on June 8, 2009 and discontinued on April 13, 2010. Using the processor speed information provided by system_profiler, I could narrow the selection down to a specific MacBook Pro "Core 2 Duo" and see the standard RAM and hard disk size for that model.

You can also enter the last 3 characters of a 11 character serial number to obtain that information from the site. Though, in my case I saw an iPhone and several desktop systems listed as well as one laptop model, though, since I knew it was a laptop, I knew which one was the appropriate one.

If you need to select multiple items on a form on a webpage in Internet Explorer on a Microsoft Windows system, you can usually do so by holding down the Ctrl key while selecting the items. On an Apple keyboard, though, there is no Ctrl key though there is a Control key. But if you are using VMWare Fusion to run a version of Microsoft Windows in a virtual machine (VM) on a Mac OS X system, you can't use that Control key to select multiple items on a form when you are using Internet Explorer in the VM unless you change the default keyboard configuration, which can easily be done by taking the following steps:

You can then select multiple items on a form by holding down the Control key while left clicking on items. If you want to go back to the default configuration afterwards, you can go back to the "Mouse Shortcuts" tab and click on the "Restore Defaults" button or just recheck the "Secondary Button" checkbox, which is associated with the mouse shortcut "Control - Primary Button".

If you need to determine whether a Microsoft Windows application is a 32-bit or 64-bit program, there are a number of ways to do so, including simply right-clicking on the file and examining its properties.