The U.S. Federal Communications Commission (FCC) in conjuction with the Federal Trade Commission (FTC) estabilshed a Do Not Call List. U.S. residents who don't want to receive calls from telemarketers can add their phone numbers to the FCC's Do Not Call Registry. Once a number has been added to the registry, telemarketers are not supposed to call the number unless one of the following conditions applies:

I've had our phone numbers on the registry for years. I believe adding the numbers may have reduced the telemarketing calls, but many telemarketers ignore the Do Not Call Registry. I have been filing a complaint through the FTC National Do Not Call Registry website whenever I receive such calls. I fill out the Submit a Complaint form after receiving such calls in hopes that if many others are submitting complaints regarding the same calling number that the telemarketing company will be fined for its disregard of the regulations that apply to them.

Lately, though, I've been finding that a large number of such calls are from "spoofed" numbers. E.g., today I received a robocall with a spiel that began with "This is Rachel at Card Holder Services". The spiel ended with a note that this would be my final notice, but I've been receiving such telemarketing calls from "Rachel at Card Holder Services" for months, each ending with the reference to a "final notice". The only option at the end of the spiel was to hit 9 to speak to someone. The person remarked about my desire to reduce my credit card rate; I said "No, I want to be removed from the calling list". I asked very politely, but the person immediately disconnected. I called the number that appeared as the calling number on my cell phone. After several rings, I received a recorded message typical of what you would find on someone's personal voicemail. I figured the telemarketer had spoofed the calling number and didn't leave a message, but a short while later I received a call from the person who had that number who was wondering who had called him and why. I told him about the telemarketing call and said I suspected when I heard his voicemail that a telemaketer had spoofed his number. He understood and mentioned he finds telemarketing calls annoying as well. The area code and first 3 numbers of his number matched those for my cell phone, likely because the telemarketer by using a number that would seem to be local to me would be more likely to have someone answer the robocall. Some people may avoid the plague of telemarketing calls by only answering numbers they recognize, but I use my cell phone for work and can't tell by looking at an incoming number whether it is a work-related call or an annoying telemarketer, since I can't know the number for everyone who may call me on a work-related matter and those calling on work-related matters may be in other parts of the country. Nor can one even reliably assume today that an area code reveals the geographical area of the caller.

As long as a significant percentage of people buy whatever a telemarketer is selling, telemarketers won't stop calling no matter how annoying most people find such calls. But someone would be exceedingly foolish to provide a credit card number and other personal information to some unknown caller offering to reduce one's credit card rate in return for providing such information to the caller. Since I've been getting such calls for months, I can only assume that a significant number of people do so, though. When I know the caller is ignoring the Do Not Call Registry, I assume that the caller's business practices are dubious at best. And certainly when the calling number has been spoofed, it would be prudent to assume that the caller is a scammer who may use any credit card number you provide for his own nefarious ends or sell it to others.

According to the FCC Caller ID and Spoofing page a telemarketer must:

Under the Truth in Caller ID Act, violators can be subjected to a penalty of up to $10,000 for each violation of the rules.

So what can you do in such cases? I filed a complaint for the above mentioned call via the FTC Do Not Call Registry complaint form. You can also file a complaint through the FCC's consumercomplaints.fcc.gov site by submitting a Phone Complaint. For the "Phone Issues" field, you can select "Telemarketing (including do not call and spoofing". It only takes a few minutes to complete the complaint forms and I filed a complaint in this case there as well.

Will filing such complaints do any good? The Rachel With Cardholder Services’ Coughs Up Refunds article published on January 19, 2015 on the ABC News site notes:

The Federal Trade Commission, the nation’s consumer watchdog, has reached a settlement with a collection of companies it says used that ploy. And now a special administrator is preparing to mail out checks to victims.

But that article also notes:

In fact, after the FTC took its first action against “Rachel,” investigators were frustrated when the calls continued, likely placed by other sketchy companies.

I'm not looking for a remuneration for the disruption to my work and wasted time from such calls, but I would like to see companies that ignore the Do Not Call Registry and use spoofed numbers fined and, hopefully, put out of business. I hope that others will also file complaints and that an accumulation of such complaints will lead the FTC or FCC to track down at least some of these companies and take action against them.

After an issue with my MacBook Pro a few weeks ago that resulted in Microsoft Entourage 2008 for Mac crashing, I found that searches for email would not return all pertinent messages. I could search on subject, "from" addresses, etc. and see results, but not all messages I knew were in the inbox or other folders. E.g., if I searched by subject for daily logs I receive, the search would not return any messages between December 31, 2014 and March 31, 2015, though I could see they were in the inbox if I ordered it by subject.

To correct the problem, I clicked on the Apple icon in the upper, left-hand corner of the screen, chose System Preferences and then Spotlight from the Personal group. I confirmed that Messages & Chats was checked (all entries were checked by default). 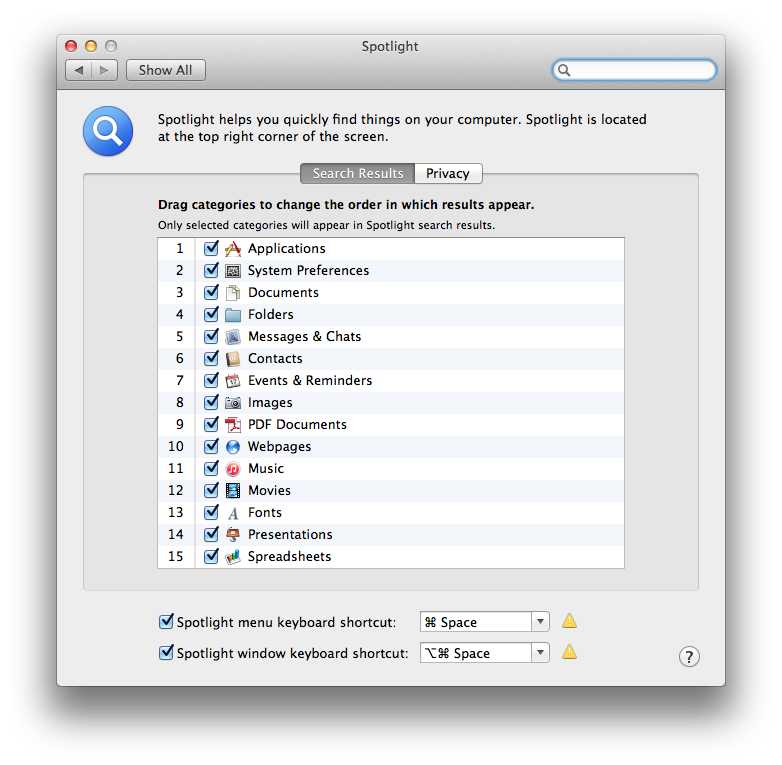 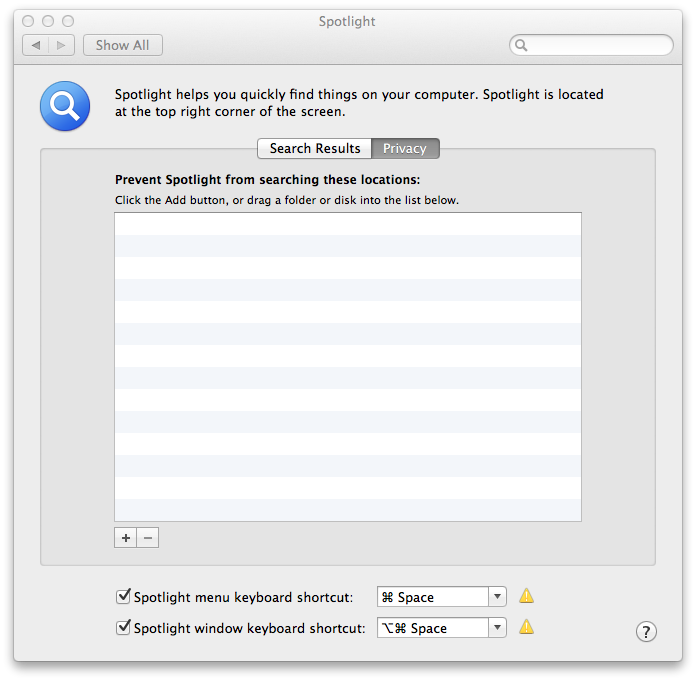 Within the Privacy window, I clicked on the plus sign, "+", and addeded my home directory, e.g., jdoe, to the list of directories that should not be searched. When you do so, a warning window will open with a message similar to the one below:

Are you sure you want to prevent Spotlight from searching in "jdoe"?

If you exclude this location from Spotlight searches, the search feature won't work in some applications.

I don't know how long the reindexing process took to complete. I didn't peform any further searches in Entourage until the following day; at that time searches did return all messages.