No scroll bars under Yosemite

When I received a new MacBook Pro (Retina, 15-inch, Mid 2015) laptop running OS X Yosemite (10.10.5), I found that there were no scrollbars in Windows, e.g., within a Terminal or browser window. I could scroll through a page in a browser window using the up and down arrow keys; a scroll bar would appear on the right of the window as I was moving up and down with the arrow keys, but if I tried moving the mouse pointer over to where the scrollbar was appearing, it would disappear and I couldn't move up or down using the builtin by moving the mouse ponter to the right to a scroll bar using the touchpad on the laptop. I could scroll up and down in a web page or a Terminal window by putting two fingers down on the touchpad and then moving them up and down, but I liked having the scroll bar at the right side of a window to use for scrolling.

I was able to have a scroll bar appear by clicking on the Apple icon at the top left-hand corner of the screen, selecting System Preferences, View, then General and changing the option for "Show scroll bars" from "Automatically based on mouse or trackpad to "Always". The other option was "When scrolling". 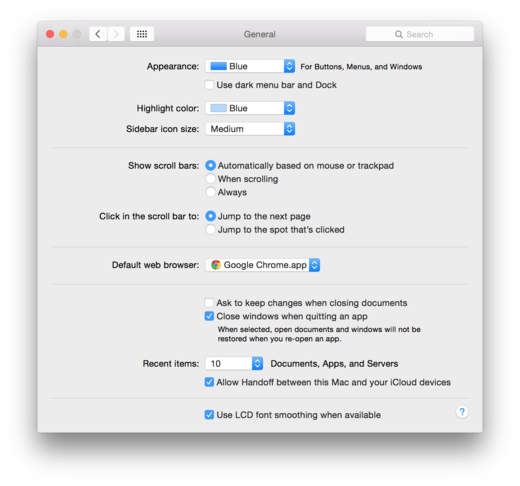 The meaning for the settings is as follows: