Microsoft Windows Font File in Use

I could not delete a TrueType font file, BlackFlowersBlossom.ttf, from the folder in which it was located, which was a folder beneath the user's Documents directory on her Microsoft Windows 10 system. If I attempted to delete it, a "File in Use" window opened with the message "The action can't be completed because the file is open in System." 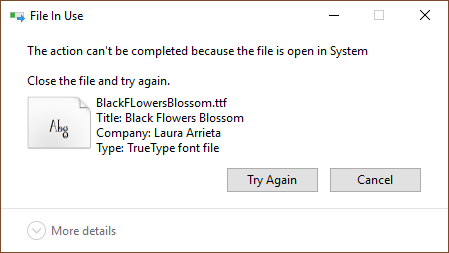 Using a Google font on a webpage

If you wish to use a Google font on a web page, go to fonts.google.com and select a font that appeals to you. When you've selected a font, you will see "1 Family Selected" at the bottom of the page; click on that text.

You will then see the code you need to include in your webpage to use the font. E.g., if I want to use the Yatra One font, I would include the following HTML code in the HEAD section of the webpage:

You will also see the code to use in tags within the page to specify that text should be displayed in the chosen font.

Then I could use font-family: 'Yatra One', cursive; to specify use of that font. The inclusion of cursive after 'Yatra One' indicates to a vistor's browser that if the first font listed, Yatra One, is unavailable or can't be used, whatever font it uses for a cursive font should be used, instead. You can include multiple alternate font options separated by commas. Note that in the link to the Google web page for the style sheet for the font that "Yatra" and "One" have a plus sign between them, instead of the space, but the font name is "Yatra One", which is what is used when you specify the use of the font in the page. E.g., suppose I wanted to specify that font for use with an H3 header tag. I might use code such as the following code:

In the above example, I changed the font color to orange and increased the font size to 35 pixels and centered the text on the page. The text would be displayed as shown below:

Through someone else's posting, I discovered a site today that will help you identify a font. The site is WhatTheFont .

Seen a font in use and want to know what it is?
Submit an image to WhatTheFont to find the closest matches in our database. Or, let cloak-draped font enthusiasts lend a hand in the WhatTheFont Forum

You can upload an image file to the site for analysis or specify a URL.

You can also search for and buy fonts from the site at MyFonts.