Turning off command echo in MUSHclient but retaining command history

For MUSHclient, if you don't want commands echoed back to you when you type them, but want them stored in the command history, leave command echo turned on. You can check that it is turned on after you connect to the MUSH by clicking on Display. You should not see a check mark next to No Command Echo. If one is there click on No Command Echo to uncheck it. 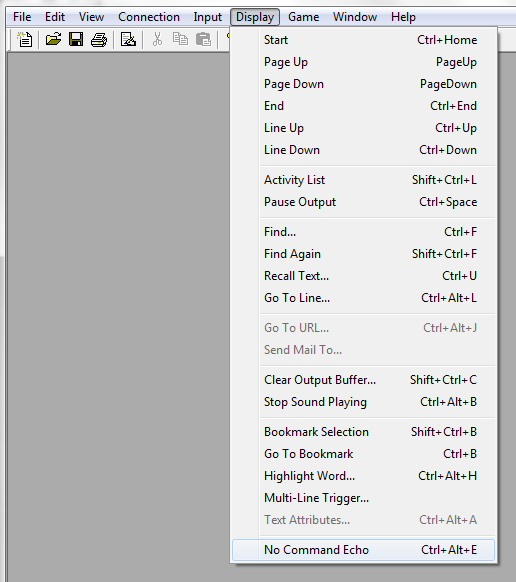 You then need to take the following steps:

You should then be able to see commands you type in the command history window that you can open with Ctrl-H. If you want to save the setting so that you don't have to change it the next time you connect to the MUSH, click on File and select Save World Details.

MUSHClient, is a freeware MUD client. Since I wanted to be able to install the software on several systems, but have all of the systems use the same MUSHClient World Information files, which are stored as .MCL files, I wanted to see where the program stored the location for the worlds files. Of course, I could manually change the location within the Global Preferences on each system, but I wanted to see if there was a way I could just put the information in a .reg Windows registry file or set it with a script.

Initially, I thought the program stored the default world file directory location in the Windows registry, but I found that, though there was a DefaultWorldFileDirectory value in the registry, the program actually used an SQLite database, instead of the registry entry.