Sometimes I encounter difficulties signing out of an account on Amazon's website when I need to sign into another account, if the resolution of the display isn't great enough to allow me to see the bottom of Amazon's list of choices where the sign out option appears. If I need to logon on such a system, there's no problem. If I visit Amazon's home page, I can click on "Hello. Sign in Accounts & Lists" where I see a "Sign in" button. 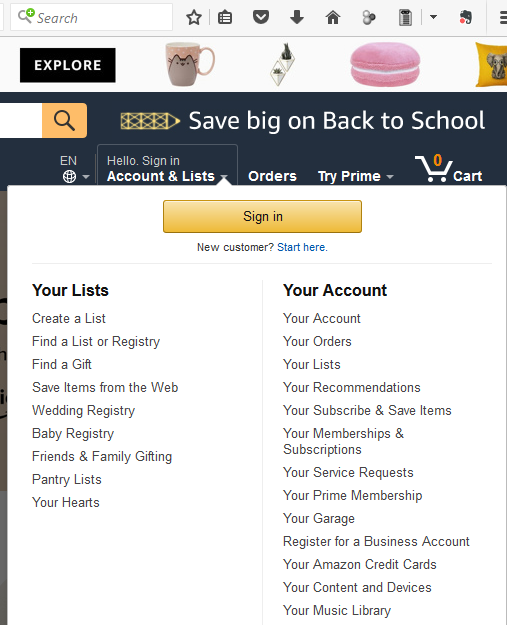 Robert Cringely posted an article today to his I, Cringely website regarding how the amount of money an advertiser spends for Google AdWords affects the advertiser's placement with Google Adwords when someone searches for a word which the advertiser has paid Google to associate with his website in the ads Google displays. Paying more money for a particular word will supposedly increase the likelihood that the advertiser's website will appear on the first or first few pages Google displays when a search is performed that includes the word.

Amazon.com has been hoisted on its own petard. An Associated Press report on ABC News today states that Amazon paid $40 million to Soverain Software LLC to settle a software patent-infringement lawsuit. Soverain, a small Chicago-based company claimed that Amazon's website infringed on Soverain patents on network sales sysetms and Internet server access control and monitoring systems.

Amazon's own use of software patents to try and stymie competition prompted many to urge a boycott of Amazon a few years ago. Amazon claimed Barnes and Noble's use of a one-click shopping technique infringed on an Amazon software patent. Amazon settled that lawsuit in 2002, but didn't disclose details of the settlement.

Amazon essentially obtained a patent on the idea that a command from a web browser to a web server could carry with it identifying information about your identify, which is done by the use of a cookie. Unfortunately, the US Patent Office is willing to grant software patents for lots of obvious ideas and large corporations now seek to use such patents to stifle competition. And smaller ones can use such patents to reap large rewards for simply being the first to get a patent on the idea. When someone else does the hard part of actually implementing the idea, then the software patent holder takes the other company or individual to court hoping for rich rewards with little real effort involved on their part other than filing the patent application. Instead of fostering innovation as was the founding fathers' intent for patent law, the software patents limit innovation and enrich software patent lawyers and the companies who make a living from waiting on others to implement an obvious idea and then suing them or getting a patent specifically to stymie or harrass a competitor as Amazon did with the 1-Click patent.

Even one of Amazon's own founding programmers, Paul Barton Davis, labelled Amazon's 1-Click patent "a cynical and ungrateful use of an extremely obvious technology." He further stated "Amazon.com's early development relied on the use of tools that could not have been developed if other companies and individuals had taken the same approach to technological innovation that the company is now following."

But it isn't just software patents where the ridiculousness of the US Patent Office's practices is shown. Would you believe the US Patent Office granted a patent on a crustless peanut butter and jelly sandwich? Well they did. The J.M. Smucker Co. was granted a patent on a method for making "Uncrustables", which are just peanut butter and jelly sandwiches with no crust sealed in plastic. And the US Patent and Trademark Office (USPTO) has even allowed a patent on the method of moving side-to-side on a swing. No, I'm not making this up. None other than the Wall Street Journal reports this absurdity in an April 5, 2005 article at Patent No. 6,004,596: Peanut Butter and Jelly Sandwich.

Smuckers also filed a lawsuit based on its patent, going after a small grocer and caterer, Albie's Foods Inc. of Gaylord, Michigan, demanding they stop selling crustless peanut butter and jelly sandwiches.

Why are patents granted on ideas like 1-Click shopping or sealed crustless peanut butter and jelly sandwiches? One reason may be that the USPTO encourages patent examiners to approve patents quickly with minimal quibbling, since the USPTO is now supposed to be financially self-sufficent and charges per patent application processed. You can find further information on what has led to the current state of affairs with the USPTO at The Patent Trap.