To temporarily turn off the realtime antivirus protection in McAfee AntiVirus Plus, e.g., so you could move a file to another system for analysis that it might deem malware or to scan the system with other antivirus software, you can take the following steps:

If you select a timed option, the protection will automatically turn back on after that period of time. You can also turn on protection again prior to that time by modifying the "Real-Time Scanning" setting again.

If you wish to view or restore items McAfee AntiVirus Plus has quarantined, you can click on "Quarantined items" under Settings, which will show you all files in the quarantine area, if any.

Note: these steps were tested on McAfee® AntiVirus Plus version 16.0

I downloaded SUPERAntiSpyware Free Edition version version 8.0.1048, an antivirus program, from the developers website on January 27, 2020. When I attempted to install it by right-clicking on the file and choosing "Run as administrator, a Windows Defender window popped up with the message below:

Windows Defender SmartScreen prevented an unrecognized app from
starting. Running this app might put your PC at risk.
More info

When I clicked on the "X" at the top-right, hand corner of the window, the message went away, but the installation did not start.

After I upgraded ClamWin to version 0.99.1 on an HP laptop running Microsoft Windows 7 Professional, I saw a window titled "freshclam.exe - Ordinal Not Found" with the message "The ordinal 177 could not be located in the dynamic link library libclamav.dll."

When I right-clicked on the ClamWin icon in the notification area at the lower, right-hand corner of the screen and selected Open ClamWin, I saw the prompt "You have not yet downloaded Virus Definitions Database. Would you like to download it now?" I chose "Yes" and saw the "Ordinal Not Found" message again.

A user of a Windows 7 Professional system (64-bit version) sent me a screen shot she had taken of a BitDefender Threat Scanner window that had popped up on her system Friday morning. She had been seeing the message periodically in the past.

After using the Sysinternals autoruns utility, I found that a BitDefender driver Trufos.sys was being loaded. I disabled it with autoruns.

, I was notified that the antivirus database was not up-to-date. When I had the software attempt to update the virus definitions, I saw the message "Update Center: Task failed. Proxy server is not found."

When I viewed the details, the "Detailed report" showed " Update Center: failure (65)"

I configured Internet Explorer not to use a proxy server and then clicked on the update button within Kaspersky Small Office Security 3. It was then able to update its databases.

A user reported that she saw a message on her system, which runs Windows 7 Professional, Friday morning December 19, 2014 indicating that malware had been detected on her system by Malwarebytes Anti-Malware 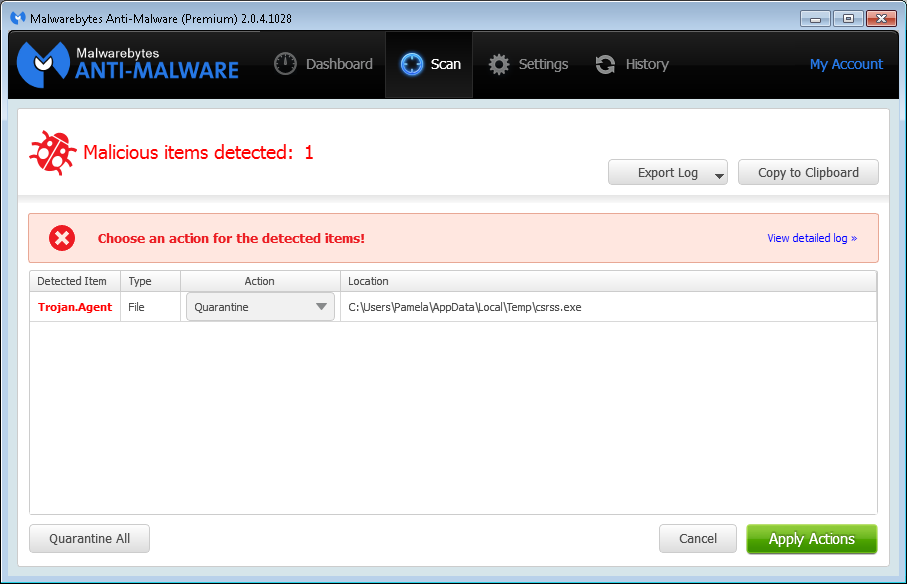 The file, which Malwarebytes identified as Trojan.Agent, was csrss.exe was located in her %TEMP% directory, i.e., C:\Users\Pamela\AppData\Local\Temp. There is a legitimate Microsoft Windows file named csrss.exe, but that file is located in C:\Windows\System32. The legitimate file on her system is 7,680 bytes in size and has a time stamp of 0/7/13/2009 08:39 PM. When I checked the one Malwarebytes Anti-Malware was identifying as malware, I saw it had the same size and time stamp.

I uploded the one Malwarebytes Anti-Malware flagged as malicious to Google's VirusTotal site, which analyzes uploaded files with many antivirus programs to determine if they are safe or potentially dangerous. I had the site reanalyze the file, which had been scanned previously. Zero of the fifty-four antivirus programs used by the site to scan the file identified it as malware. The SHA256 hash listed for the file is cb1c6018fc5c15483ac5bb96e5c2e2e115bb0c0e1314837d77201bab37e8c03a - see the report.

F-Secure provides a free Rescue CD which allows you to boot a PC from a CD and scan it for malware using F-Secure's antivirus software. The F-Secure Rescue CD will attempt to disinfect any infected files and will rename any it can't disinfect by putting a .virus extension at the end of the file name. By doing that, when you reboot the system into Microsoft Windows, the infected file will not be loaded into memory.

On a Windows 7 system that came with avast! Free Antivirus preinstalled, whenever I was browsing the web with Internet Explorer 9, I would periodically see "Internet Explorer has stopped working" messages. When I clicked on the "View problem details" link in the window that appeared, I found the problem associated with the avast! antivirus program's asWebRepIE.dll Dynamic Link Library (DLL) module.

PC Tools free Alternate Operating System Scanner allows you to boot a Microsoft Windows system with an alternate operating system on a CD. You can then scan the system for viruses from the CD, though I've found the utilitity of its anti-virus scanner to be very limited.

When I tried the virus scanning feature on a Dell Dimension 4550 PC that had Windows XP Home installed on the hard drive, the scanner didn't seem to be very effective, completing the scan in only 8 seconds and checking only 738 files out of the hundreds of thousands of files that existed on the Windows partition of the hard drive I scanned.

You can get a shell prompt by choosing "System Shell" from the main menu, which will give you an ash shell provided via BusyBox, but the AOSS CD is lacking in standard Linux command line utilities. There is no scp nor ftp for transferring files over the network to another system. There is no links nor lynx one might use to access a web server to download or upload files. Wget and curl are also missing as are the standard network utilities such as ifconfig and netstat.

When I checked the contents of /proc/version, I saw that AOSS uses Ubuntu GNU/Linux for the operating system.