I have an Apache OpenOffice Calc spreadsheet that I use to track deposits to bank accounts. I loaned a friend money some time ago for a used car; when I get a check from him, I note it in a worksheet in the Calc workbook. I also get checks from him sometimes unrelated to the auto loan repayment and have received some checks that include the auto loan payment plus reimbursement for other expenses. I have a "note" column in the worksheet where I'll always have "75", if the check applies to the auto loan repayment, though there may be other text before and after the "75" in the cell. So I thought it would be easy to count the number of checks I've received from him that apply to the auto loan repayment by using the formula below, since the note column is column F and the deposits start in row 2 (the first row is a heading line) and go through row 32:

That works in Microsoft Excel, but it doesn't work in OpenOffice Calc (I'm using version 4.1.1). The count is always zero, if I use the formula above. I found I have to use the formula below, instead, which correctly reports 21 occurrences of 75 in column F at the moment:

Excel will treat the first asterisk as representing a character or any number of characters before the "75" and the asterisk after "75" as representingany number of characters appearing in the cell after "75". However, Calc doesn't view the asterisks that way. Instead, I need to use a regular expression. In a regular expression (regexp), a period represents any character and an asterisk represents zero or more occurrences of the preceding element. For example, ab*c matches "ac", "abc", "abbc", "abbbc", and so on. So the ".*" represents any character appearing zero or more times in the cell. If I try using the formula I use in Calc in Excel, it will report zero occurrences just as Calc reports zero occurrences when I use the formula that works in Excel in Calc.

Since I want to obtain the total amount he has repaid so far, which is the count of the number of occurrences of 75 in column F by $75, I use the forumula below in Calc to obtain that amount, which returns 1575 as of today:

After I attempted to close a table in an Apache OpenOffice Base database, the database application stopped responding. The table remained open, but I couldn't do anything in it, open any other table, etc. So I forced the program to quit using the Activity Monitor. When I tried to reopen OpenOffice after its abnormal termination, I saw the message below:

Do you really want to continue?

I selected "No" and looked in the OpenOffice user profile for my account for a .lock file - you need to use the -a option for the ls command to see "dot something" files that would otherwise be hidden.

When the program reopened I saw an OpenOffice Document Recovery window allowing me to recover the database I had been working on before I had to terminate the Base application. 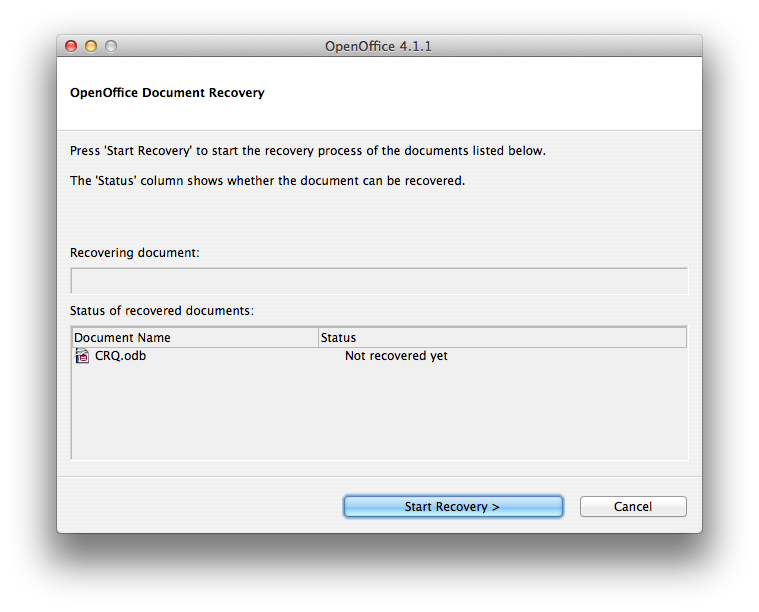 I clicked on the Start Recovery button and then was informed that the recovery of the database was successful. 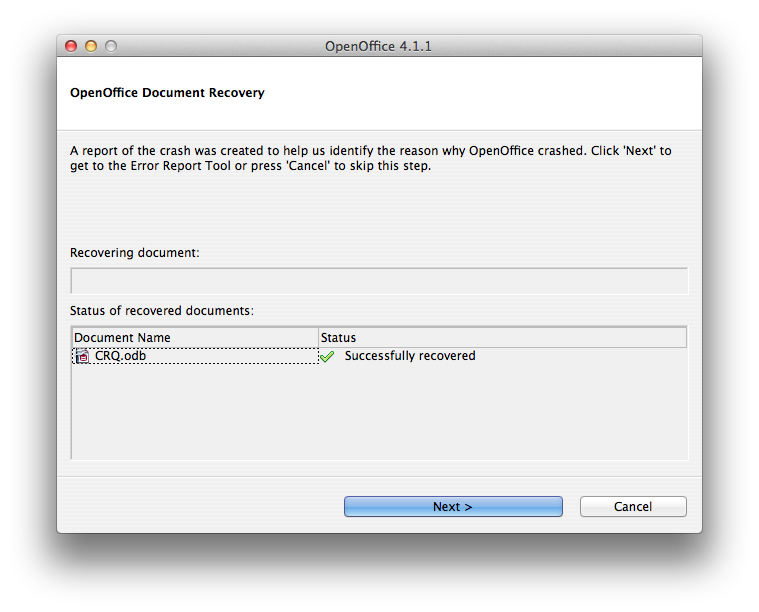 When I clicked on Next I was able to access the database again.

As does Microsoft Excel, Apache OpenOffice calc provides an offset function that allows you to calculate a value based on the contents of a cell that is a specified distance in rows and columns from a particular cell. The syntax for calc is as follows:

Returns the value of a cell offset by a certain number of rows and columns from a given reference point.

Reference is the reference from which the function searches for the new reference.

Rows is the number of rows by which the reference was corrected up (negative value) or down.

Columns (optional) is the number of columns by which the reference was corrected to the left (negative value) or to the right.

Height (optional) is the vertical height for an area that starts at the new reference position.

Width (optional) is the horizontal width for an area that starts at the new reference position.
Arguments Rows and Columns must not lead to zero or negative start row or column.
Arguments Height and Width must not lead to zero or negative count of rows or columns.
In the OpenOffice Calc functions, parameters marked as "optional" can be left out only when no parameter follows. For example, in a function with four parameters, where the last two parameters are marked as "optional", you can leave out parameter 4 or parameters 3 and 4, but you cannot leave out parameter 3 alone.

The Apache OpenOffice spreadsheet program Calc as of the current 4.1.1 version does not provide the DATEDIF function found in Microsoft Office Excel and Google Sheets. The datedif function can be used to calculate the number of days between two dates in Excel.

Calc does provide a NETWORKDAYS function, but that gives you the number of work days between two dates. I.e., weekends are excluded.

Returns the number of workdays between a start date and an end date. Holidays can be deducted.

Holidays is an optional list of holidays. These are non-working days. Enter a cell range in which the holidays are listed individually.

However, the DATEDIF function isn't needed to calculate the number of days between two dates in Calc. Instead, you can simply subtract the two dates. E.g., if cell B18 contains the date January 1, 2014 and cell B19 contains the date March 4, 2015, you could place the formula =B19 - B18 in the cell where you want to store the number of days between the two dates. Unless you change the formatting of the cell to be something other than a number, you will see 427 as the value in the cell with that formula given the stated dates. That forumula will produce a result equivalent to DATEDIF(Start_Date,End_Date,"d") in Excel.