In the registry, I found the following key associated with the software:

When I right-clicked on the subkeys and checked their permissions, I saw that user accounts had read permissions for them.

I used Microsoft's free Process Monitor utiltity to check the file access and registry access of the NBS.NuBert.Bootstrapper.Loader.exe process when it was run from the domain administrator account and from the user's account. I noticed that when it was run from the administrator's account, it was accessing the directory C:\Users\Administrator\AppData\Local\Nucor_Building_Systems. I copied that directory to C:\Users\useracct\AppData\Local\Nucor_Building_Systems where useracct was the user's account name.

For the administrator account the following files were in the directory:

There was also a directory with a name that began with NBS.BERT.HostEnvironment._Url_ followed by a very long string of digits and letters. There was a directory named 2011.7.7.1 within it and a file named user.config within that directory.

For the users account, the following files were the only ones initially in the Nucor_Building_Systems directory:

I copied the directory and all of the files from the Nucor_Building_Systems folder under the administrators account into the same one under the user's account, replacing the files already there.

I then logged into the administrator's account again. I right-clicked on the NuBert shortcut on the desktop, chose Properties then clicked on the Advanced button under the Shortcut tab. Run as administrator was grayed out, so I could not select it. 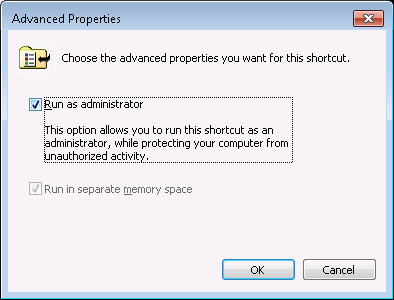 Then when the user clicked on the shortcut, he would be prompted for a user name and password. I had him put in pcname\administrator, where pcname was the name of his computer, as the user name to use the local administrator account for his PC and the password for that account. I also created a .cmd file with just the following command in it and put a shortcut to it on his desktop as well:

That would allow him to just put in the password for the local administrator account to save him a small amount of typing, if he preferred using it to the other shortcut.

Of course, running the software under the local administrator account is a poor solution, due to the security implications, but the only one I could get to work. Why do some software developers seemingly assume that their software will be run from an account with administrator privileges or that a system won't even employ the very minimum of security measures?

I deleted the SMF Links Directory Lite 1.0 mod from a Simple Machines Forum (SMF) forum. When I went through the uninstall process, there were two failures for the ./Sources/ManagePermissions.php file.

For the first failure, the uninstall process was looking for the following:

It would replace that code with the following:

Since intervening code had been placed after the first line, I manually removed the lines that would have been removed. The code that was there was as follows:

For the next test that failed, the uninstall process was looking for the following code:

It was to be replaced with the following:

What was actully there was the following:

I removed the "links" lines manually.

For the third test on the file, which succeeded, the uninstall process was looking for the following code:

It would be replaced with the following:

What was actually in the file was the following:

I clicked on Uninstall Now to uninstall the mod. After doing so, I checked the area of the code which was to have a successful removal of the mod's code. I saw the following:

Moving an SMF Forum From One Domain to Another

I needed to move a Simple Machines Forum forum from one domain to another. I've detailed the steps I took here.

These are some steps I commonly take after installing a Simple Machines Forum (SMF) forum.

If you want to make a disk image for a disk drive with Mac OS X, you can do so using the Disk Utility application that comes with the operating system. From the Finder, go to Applications/Utilities. Double-click on Disk Utility to open the application. Then, from the left side of the window, select the disk drive for which you wish to create a disk image by clicking on it to select it. 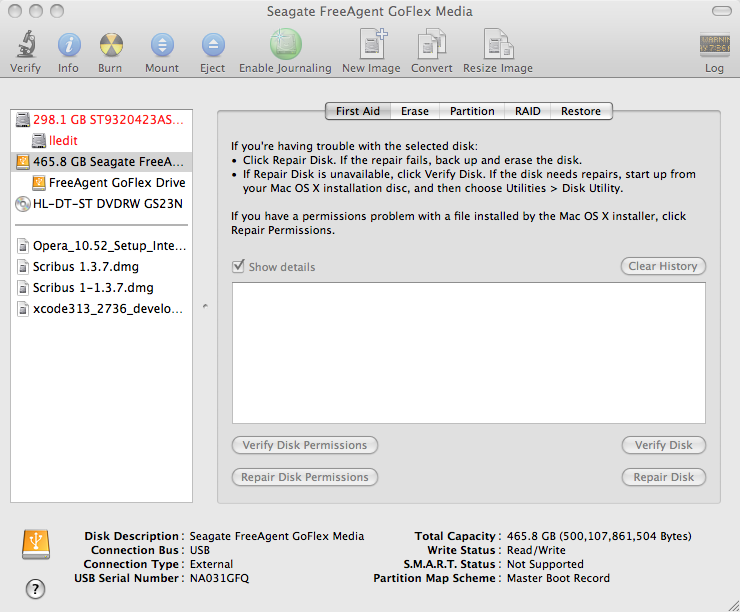 Click on New Image at the top of the window. Choose where you want to save the image. The default image format is "compressed" with no encryption. You can choose from the following options:

After installing the package SMF Links Directory Lite version 1.0, which was last modified on July 4, 2011, by Nibogo on two Simple Machines Forum (SMF) forums for a family member, she reported that links entered using the mod were not working. When I checked what was happening, I found that when she entered URLs that contained upper-case letters, all of the upper-case letters would be converted to lower-case, whichh wouldn't pose a problem if the URLs pointed to a website on a Windows server, but would pose a problem if the webserver is a Unix, Linkx, or Apple OS X system, since the case of letters is important on those systems, i.e., A.html is not the same as a.html on those systems.

I informed the developer, but since he didn't indicate he would correct the problem in the package posted on the SMF website, I commented out the line in Sources/LinksAdd.php, which was performing the conversion to lower-case. The code is in the following section.

The strtolower($context['url']) is the line that performs the conversion. I commented it out by putting // at the beginning of the line.

If you wish to check the health of a hard drive in a system, there is a disk monitoring capability commonly present in hard drives today called S.M.A.R.T. ( Self-Monitoring, Analysis and Reporting Technology; sometimes written as SMART). Information provided by SMART can provide an indication whether a disk drive is experiencing problems and may be likely to fail in the near future.

With Mac OS X systems, you can check the S.M.A.R.T. status of a hard drive from the command line using the diskutil command.

If the system has just one hard drive, the drive is generally designated as disk0. You can use diskutil list to see the drive numbers for drives in the system.

In the above case, the command shows that disk0 is the only drive in the system.

You can also check the SMART status of a drive using the Disk Utility application, which can be found with the Finder under Applications/Utilities. 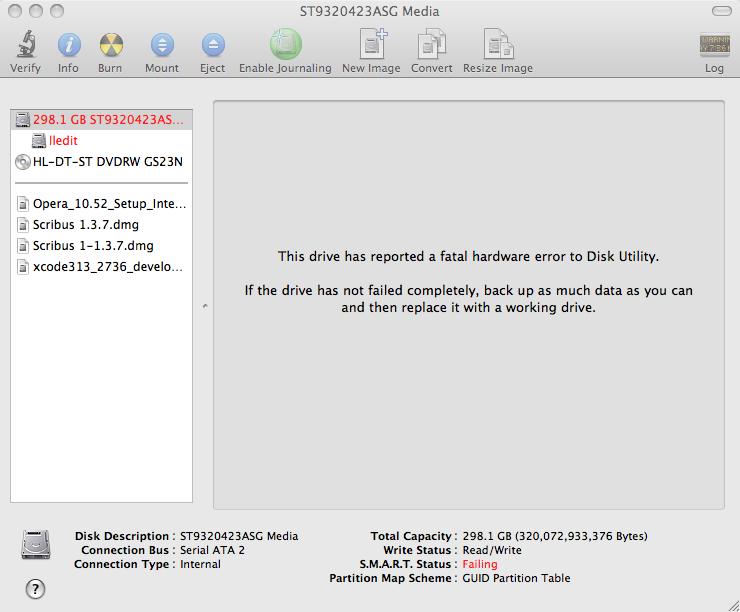 To change smileys on a Simple Machines Forum (SMF) from "Post form" to "Popup", you can take the following steps:

You will then see a table of smileys with the smiley itself in the far-left column followed by columns titled "Code", "Filename", "Location", "Tooltip or description", and "Modify".

You can change the location from "Post form" to "Popup" by clicking on Modify and then changing the location. There are three options for location: Post form, Popup, and Hidden.

In the database there is a table, smf_smileys, if you used the default prefix of "smf" for tables created within the database. It has the following fields, i.e., columns:

If you can directly access the tables in the database from a command prompt, e.g., by running mysql at a command prompt, or can issue Structured Query Language (SQL) statements through software such as phpMyAdmin, you can update the value for a range of smileys simultaneously. E.g. if I wanted to update those smileys with smiley_id between 768 and 778 to change the location from "post form" to "Popup", which is represented by a "2" in the Hidden field of the table, I could change the value using the SQL statement below, assuming the database itself is called "myforum":

If you want to create a new table in an MySQL database that has the same structure, i.e., the same fields (columns) as an existing table, you can use the command below:

When I attempted to install TinyPortal 1.104 (listed as 1.0 RC2 on SMF site, but shows 1.104 when installed) on an SMF 2.0 forum, the installation process indicated Test failed for ./Sources/Subs.php . When I checked the test that failed, I found it was looking for 'calendar' => array(. I found that text in the file, so I used a hexadecimal editor to examine the ./Sources/Subs.php file and compared it against the code for which the installation process was looking.

Inside the TinyPortal1_RC2.zip file is a package-info.xml file that indicates what file will be used for installing the mod on various versions of the SMF forum. For SMF 2.0 SMF\tinyportal200.mod provides the instructions for installing the mod. That file can be found by extracting the contents of the zip file or it can be found in Packages/temp/SMF2 after you click on Install Mod.

At How to uninstall Windows Live Essentials, there was a suggestion to try removing the program by running wlarp.exe from %programfiles%\Windows Live\Installer, but, though that directory existed, that file was not in it.