Formatting endnotes in accordance with the Chicago Manual of Style

If you are using Microsoft Word to write a paper adhering to the Chicago Manual of Style (CMS) guidelines for citations that appear in the endnotes section of the paper, references to endnotes should be made in the paper using Arabic numerals at the end of sentences with the numbers put in superscript.

Ludwig considered it an honor that his books were among those burned by the Nazis in 1933.1

You can configure Microsoft Word for CMS style citations by clicking on the References tab and then selecting a Chicago option for the Style option. Microsoft Word 2010 lists "Chicago Fifteenth Edition" as the CMS option. 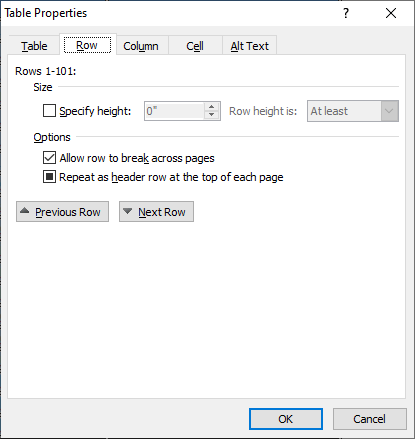 I maintain a website for an association with a little over 2,500 members that sends a monthly newsletter to members. The newsletter is sent by the U.S. Postal Service and email and I also convert the Microsoft Word document the newsletter editor sends me to HTML and post it to the association's website, which I've been maintaining for years now. The newsletter editor uses Microsoft Word to produce the newsletter. I tried Microsoft Word's "Save as Web Page" feature initially, but parts of the HTML code it produced didn't display properly on non-Microsoft Windows systems, sometimes because they didn't have the same fonts as those present on Microsoft Windows systems. And the code looked messy when I would edit the HTML version of the newsletter produced by Microsoft Word. Eventually, I decided it was actually quicker to just copy the text from Word, paste it into the Vi text editor and add the appropriate HTML formatting tags manually to get the newsletter to look close to the original Word version, but in a format that would display similarly across browsers and operating systems.

The copying, pasting, and editing process can take an hour or more, so when I came across the Word to Clean HTML site, which provides a free tool to convert documents produced by Microsoft Word and similar office software to HTML, I pasted the newsletter into its online form for conversion. The tool "strips out invalid or proprietary tags leaving clean HTML behind for use in web pages and ebooks", I hoped it might save me a fair portion of the time I normally spend each month on the manual conversion process and allow me to get the newsletter posted more promptly after I receive it. So, I copied the contents of the newsletter with command-C (I'm normally handling it on a Mac) and then pasted it into the form on the site's webpage. I checked a couple of the options that weren't checked by default: replace non-ascii with HTML entities and replace smart quotes with ascci equivalents. I then clicked on the convert to clean html button.

The HTML code produced by the tool was much cleaner than that produced by Word and gave me code that looked the same when viewed from browsers on different operating systems. I wouldn't have needed to do any editing to have the newsletter display appropriately, but I noticed that for an unordered list that at the end of each <li> entry there were extraneous <strong><u></u></strong> tags, i.e. there wasn't any text enclosed by the tags, which weren't needed. But that wouldn't have affected members' view of the newsletter. I removed it though, and made the source code a little more readable by putting in some blank lines between some of the items. But that wasn't really needed and by using the free online tool I should, hopefully, be able to reduce the process of posting the newsletter to about 15 minutes and get the newsletter posted shortly after I receive it now, so I'm thankful to Olly Cope, a freelance python web developer, for making it freely available to others. The tool was written in Python using the lxml library.

Determining the version of Microsoft Word used to edit a .docx Document

I sent someone a Microsoft Word document that contained a network diagram I had created in PowerPoint and then copied and pasted into the Word document. I created the file on an Apple MacBook Pro laptop using Microsoft® Word 2008 for Mac and saved it in "Word Document (.docx)" format. The diagram I pasted into the Word document was created with Microsoft® PowerPoint® 2008 for Mac. The recipient informed me that some of the text in boxes in the diagram was cropped, so he edited the diagram and sent me a copy of the document with his edited diagram. When I viewed his version, I saw text missing that had been present in my version and some of the double-headed arrows I had on the diagram now looked odd to me when viewed in Word on the Mac. I presumed the issue was due to the different versions of Microsoft Word we are using, since I had encountered issues before where diagrams created in a Microsoft Office application on a Windows-based PC looked different when viewed in the same application on a Mac.

I thought he was likely using Office 2013, but I wanted to verify that was the version he was using. The .docx files we were exchanging became a standard Word format starting with Office 2007. They are in an Office Open XML format, which is a zipped, XML-based file format developed by Microsoft; information about the formats can be found in the Microsoft Office 2007 article Introducing the Office (2007) Open XML File Formats. Prior to Office 2007, Microsoft used proprietary file formats based on the OLE Compound File Binary Format.1

You can check the version of Word that was last used to edit a document by unzipping the docx file; you can use the unzip command from a shell prompt on a Mac OS X system. If your unzip program isn't opening it, you may have to rename it changing the .docx extension to .zip, but that's not needed for the OS X unzip utility. When you unzip the docx file, there will be a docProps directory with an app.xml file within it. In that file you will see a number between AppVersion tags, e.g., as shown below:

To translate that number into the commonly used version number, the table below can be used:

If you are interested in the usage for the other documents within the .docx container file, see the ForensicsWiki article Word Document (DOCX). The contents of the Word document can be found in word/document.xml when you examine the files within the .docx file.

To resolve the problem, instead of copying and pasting the diagram from PowerPoint into the Word document, I saved it as a JPEG image from within PowerPoint. Then chose "Insert", then "Picture", then "From File" within Word to insert the diagram as a picture instead. When I viewed the document with embedded diagram afterwards in Word for Office 2007 and 2010 it looked the same as it did in Word 2008 on the Mac, though it had also looked ok in those Microsoft Windows applications when I used the pasted PowerPoint version. The embedded JPG file also looked the same in Apache OpenOffice Writer 4; it had not appeared when I viewed the document there previously and when I had viewed the PowerPoint file in OpenOffice Impress, the diagram looked quite different with most of the text missing and small circles beneath the network clouds in the diagram.

Saving a Word Document as a Filtered Web Page

If you select "Web Page, Filtered" for the output file format, Word doesn't include tags that only have meaning to itself. Those tags might be useful if you are reopening the file to be edited again with Word, but don't need to be there for people viewing the document in their web browser or if it is to be edited later with an HTML editor. E.g., for one document the following code was in the head section of the HTML file in the unfiltered version, but not the filtered version.

When you save a document as a filtered webpage, you will get a warning such as "Saving Test.doc in this format (Web Page, Filtered) will remove Office-specific tags. Some Office features may not be available when you reopen this page. Do you want to save the document in this format?". If you retain the original Word document in .doc format as well as the new filtered HTML version of the file, you can always re-edit the original copy, if you have any concerns about needing to retain the Microsoft Word specific information.

If you are using Microsoft Word and it is double-spacing text when you want it to single-space text, you can hit the Shift and Enter keys simultaneously at the end of lines to get Word to single-space the lines or you can take the following steps to have all of the text in the document single-spaced*:

Changing the Background Color for a Table in Microsoft Word 2000

To change the background color in a table in Microsoft Word 2000, take the following steps:

If you want to change the background color for just one cell in the table, take the same steps as above, but before you click on OK after selecting the fill color, change the value in the Apply to field from "table" to "cell".

If you want to change the background color for an entire row in the table, the steps are basically the same, but you need to highlight all the cells in the row before selecting Table Properties.

Turning Display of Paragraph Markers On and Off in Microsoft Word 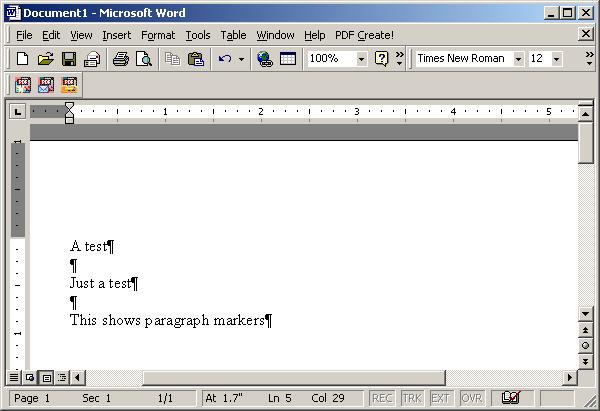 If you are seeing paragraph marker symbols, ¶, in your Microsoft Word documents, as in the above example, and want to turn off the display of these markers, which indicate the end of a paragraph, click on Tools and then Options. Under the View tab, you will see Paragraph marks checked. Uncheck that field and click on OK. 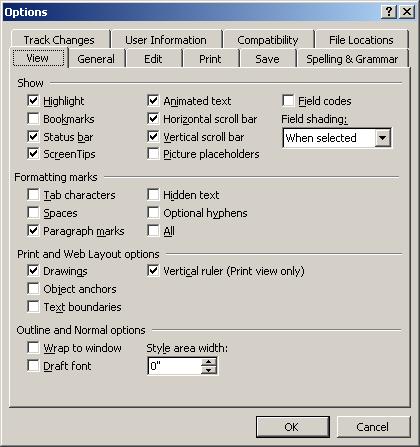 The paragraph markers should disappear from your document.