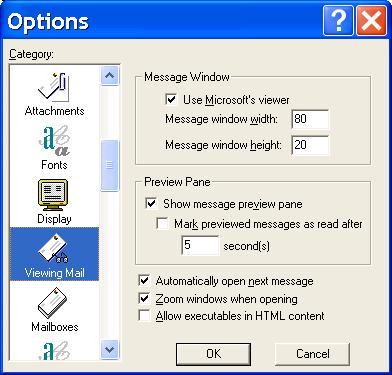 You can change the ports used by Eudora for outgoing or incoming email from the standard SMTP and POP3 ports, which are 25 and 110, respectively. To do so, close Eudora then move the esoteric.epi file from Eudora Pro\extrastuff up one directory to Eudora Pro, presuming that you installed Eudora in \Program Files\Eudora Pro. Then take the following steps:

Many email servers require senders to authenticate with the server by some mechanism, such as by providing a userid and password, when attempting to send email through the email server that is not destined for an email address residing on the server itself.

If you are attempting to send an email message using Eudora and you see a message similar to the one below, then the SMTP server that Eudora has been configured to use for outgoing email likely requires authentication.

Version 4.2.2 of Eudora supports authentication when sending email. If you have a Windows 4.x version of Eudora, you can upgrade it to version 4.2.2 by downloading ep4xto422.exe from the updater422 folder on the Qualcomm FTP site. Version 4.2.0 doesn't support authenticating when sending email, though the help files indicate that it does, according to Eudora Pro 4.x - SMTP Auth . If you don't know which version of Eudora you are running, you can click on Help and then About in Eudora. You should see "Version 4.2.2" for that version.

To enable authentication when sending in Eudora 4.2.2, you must edit the eudora.ini file. Close Eudora, if it is open, and add the following two lines below the [Settings] line in eudora.ini file.

Then, when you reopen Eudora, SMTP authorization should be enabled.

Note: there are different methods of authenticating with an email server. If you see a message similar to the following, the email server does not support the authentication method used by Eudora.

For instance, Eudora 4.2.2 doesn't support the Plain and Login methods.

You can determine which authentication methods a server supports by using telnet to connect to port 25 on the server, which is the standard SMTP port. After you issue an HELO or EHLO command and some name for the system from which you are connecting, e.g. "laptop" or "mysystem.example.com", you should see AUTH listed as one of the commands the server understands with the authentication methods it supports listed immediately after AUTH on the same line.

In the example above, the email server only supports the LOGIN and PLAIN methods, which resulted in Eudora complaining that it "Can't find a supported authentication mechanism for sending messages, and you've specified to require authentication."

According to Negotiating an SMTP AUTH Authentication Mechanism, "The standard Eudora client (downloadable from www.eudora.com) tries to use CRAM-MD5 by default."

If an email server supports CRAM-MD5 and DIGEST-MD5, you would see the following, if you connected to port 25 on the server, after you issued an helo or ehlo command.. 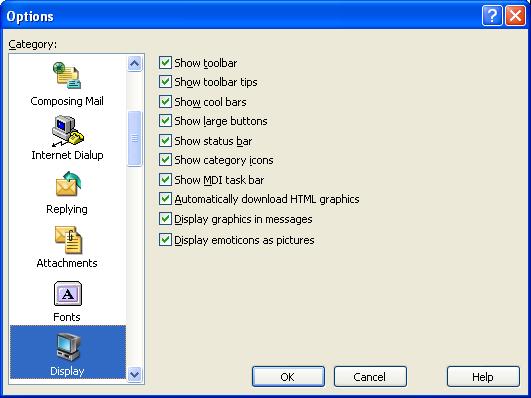 If Eudora is cutting off text on the left side of printouts when you print an email message within Eudora, you can adjust the page setup configuration to correct the problem.

When I started Eudora 4.2 on Pamela's system, I saw the following:

An instance of Eudora may be running on a remote computer. Accessing a mailbox from two instances of Eudora may lead to data corruption. Please indicate how you wish to proceed.

I chose "terminate remote instance". But that just led to Eudora closing. So I looked in the directory where Eudora stores the user's email and found an OWNER.LOK file. Eudora creates the file when it starts to keep two instances of Eudora from modifying the same mail files. But, if Eudora crashes, the file may remain and you may need to manually delete it. I deleted the file.