I wanted to save a local copy of an image on a webpage I was viewing in the Google Chrome browser on a Windows 10 system, but I couldn't right-click on it to download it, so I thought I could look for it in the Chrome browser cache, which is located at C:\Users\username\AppData\Local\Google\Chrome\User Data\Default\Cache where username is the name of the relevant account on a Windows system. I had the ChromeCacheView program from NirSoft on the system, which provides a command-line option to copy image files from the Chrome cache for a user, so I used it. Since I was logged into a regular user account, I opened a command prompt as the administrator and then made the working directory the directory where the ChromeCacheView program was located with cd C:\Program Files (x86)\Network\NirSoft\ChromeCacheView. Then from that directory I issued the command below:

You can use the -folder option to tell ChromeCacheView which user's cache file you wish to use while the /copycache option can be used to specify the directory where you want images, such as PNG files, to be copied—in this case I was looking for a .png file because when I examined the HTML code on the webpage I thought that the the image was a PNG file. I created a temp\chrome directory under the Documents directory for the user account prior to issuing the command to hold the images stored in the cache. After the command completed, I could see all of the PNG files that had been in the Chrome cache in that temporary directory I had created.

When I didn't see the image I was looking for, I thought I might have misidentified it in the code, so I copied all of the image files from the cache directory, not just the PNG ones by changing "image/png" to "image" in the command. I.e.:

To remove cookies for a specific site in Google Chrome version 62, take the following steps:

Open sites list for a Chrome process on OS X

Chrome on a MacBook Pro laptop running OS X Yosemite (10.10.5) that I was using became unresponsive. Activity Monitor showed a Google Chrome process was using about 100% of the CPU cycles. I wanted to see what web sites the process was accessing in the browser tabs associated with the process. One way to do so is to double-click on the Chrome process in the Activity Monitor, which will open a smaller window showing information on that process. Click on the Open Files and Ports tab on that window. You can then copy the information you see in that window into a file and, using grep, extract all of the lines containing the IP address of the system, which will provide a list of sites accessed by the Chrome process.

When I started using a MacBook Pro laptop running OS X Yosemite (10.10.5) today, I found that the Google Chrome browser (version 35.0.1916.153) was slow to respond when I attempted to access web pages. When I checked the system CPU usage from a Terminal tab using the top command, I found a Google Chrome process with process identififer (PID) 29634 was consuming about 90% of the CPU cycles.

You can determine what web pages a Google Chrome process has open by putting chrome://memory in the Chrome address bar. Once you've identified the relevant Chrome window/tabs associated with a process, you can close the tab, or tabs, that may be associated with the process to reduce CPU usage. If needed, you can also suspend a process temporarily under OS X with the kill command.

I recently overwrote a file with notes about a problem I had to deal with that was residing on a web server by moving another file over top of it accidentally. I was in a hurry to complete my notes so I could go to bed; I thought about waiting until the morning to complete the notes, but thoughit I could complete them in just a few more minutes, but when I used !:1 as a shorthand in a mv command, I didn't realize that the second item on the last command line entry was the filename for the file with my notes. I didn't realize what I had done until I tried to view the web page with my notes from the PC I was using at the time for the SSH connection to the web server.

Since I had viewed the notes in the Google Chrome browser on the Microsoft Windows-based system I was on shortly before I overwrote them, I thought I might be able to find a copy of the notes in the browser's cache. But since I didn't grasp what I had done until I refreshed the page in the browser, it was now too late to get the data from the Chrome cache, since the cached page now just showed the "404 file not found" message due to the file no longer existing on the web server. So I thought there still might be a slim chance that I could recover the notes web page from a Volume Shadow Copy, i.e., a prior version of the file stored on the Windows system. I thought, if I could identify the particular cache file used for that webpage, there might be a prior version of that file stored by the Volume Shadow Copy Service. I thought I could possibly use ChromeCacheView, which is a small, free program that will allow you to examine the Google Chrome web browser cache. With that program you can view a list of all cached web pages and view the cached copies of those pages stored on the system. I was able to identify the particular file in the C:\Users\%username%\AppData\Local\Google\Chrome\User Data\Default\Cache directory that held that particular cached webpage. The file was data_4, but unfortunately, I wasn't able to find a prior version of the file. Though if you need to examine the Chrome cache on a Microsoft Windows system, ChromeCacheView is a very useful tool well-suited to that purpose. You can also put chrome://cache in the Chrome addres bar to see a list of URLs of cached pages, but ChromeCacheView provides many more capabilities for operations on that list of cached items.

After my wife installed the Yahoo Messenger Suite so that she could chat with a friend using it, on opening the Google Chrome browser, the Yahoo Search - Web Search page would appear. She didn't want that; she wanted to have google.com as her home page and to have a tab open to that when she started the browser as had occurred prior the the installation of the Yahoo Messenger software. She said she had chosen not to install the Yahoo toolbar and not to have it make such changes when she installed the software, so was irked to find her home page was "hijacked" to be a Yahoo search page. I found that I need to change both her home page and the start page for Chrome to put her settings back to what they had been prior to the installtion of the software.

Oftentimes I've found that a web browser is responsible for high memory utilization or high CPU usage on a system. But determing what tab or tabs is culpable can be difficult. Fortunately, Google provides a mechanism for doing so within its Chrome browser. By putting chrome://memory in the address bar in a tab within the browser, you can get details on the total memory usage by all browsers open on the system and the memory consumed by tabs within Chrome.

Checking on the cause for slow performance on a Microsoft Windows system, I opened the Task Manager and saw that memory utiilization was high. Clicking on the Memory column header to order the list of processes by memory utilization, I saw that the Google Chrome web browser was consuming most of the memory; there were many Chrome tabs open in the browser. 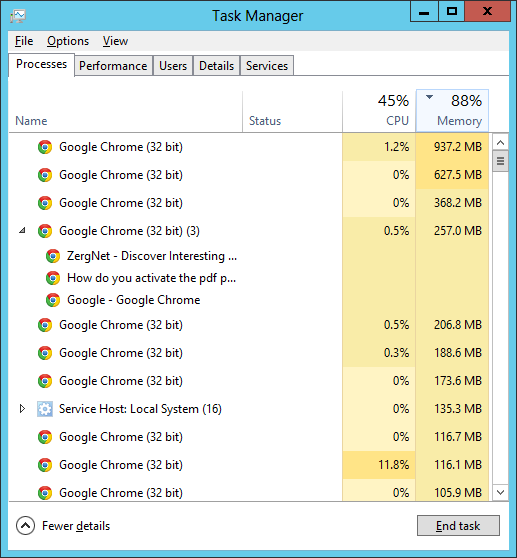 I could see that the Chrome tab consuming the most memory was one consuming 937.2 MB of memory.

To determine what webpages associated with tabs open in Chrome are consuming excessive amounts of memory or CPU time, put chrome://memory in the address bar of the browser. That will provide information on the amount of memory consumed by each tab open in the browser as can be seen in this example. Since the entries aren't ordered by memory utilization, you will need to scroll through the list to find the tabs consuming the most memory.

In this case, when I scrolled through the list I saw the tab that was consuming 937.2 MB of memory had a CNN.com article open in it. When I went to that tab I saw a "Shockwave Flash has crashed" message at the top of the tab. When I clicked on "Reload", I saw that memory utilization for that tab inreased slightly. Moving back to a prior page in the tab with the back arrow resulted in the Task Manager then showing the highest memory utilization for a Chrome process to be about half the 937.2 MB shown previously. I closed the tab to free memory.

You can reveal a lot of internal Google Chrome browser information by putting chrome:// in the Chrome address bar.

E.g., Google Chrome maintains its own internal DNS cache. You can display the entries in that cache by putting chrome://dns in the address bar for Chrome. When you do so, you will see information similar to that displayed below:


You will also see a page load count for web pages.

If you put chrome://downloads/ in the address bar you will see a list of the recently downloaded files and the URLs that were used to download them as well as the dates on which the files were downloaded..

You can view Chrome's history information showing a list of recently visited pages with the days and times they were visited with chrome://history/.

You can see information on Chrome's memory utilization, including the amount of memory used by each Chrome tab using chrome://memory. That will also reveal the amount of memory used by other browsers, such as Internet Explorer and Firefox, that are open on the system. E.g., this is an example from a Windows 7 system where 3 tabs are open within Chrome, one for Wikipedia, one for Google, i.e., google.com, and one for chrome://memory itself, which is labeled "About Memory". The tabs are identified by Tab at the beginning of the name. IE 11 and Firefox 35.0.1 are also open on the system and so information about their memory utitlization is also displayed.

Setting Chrome as the default browser

To set Chrome as the default browser, take the following steps:

When you do that, the HKEY_CLASSES_ROOT\http\shell\open\command is updated as shown below when the query was run before and after the default browser was changed from Internet Explorer to Google Chrome on a Windows Server 2012 Essentials system.

If Firefox is the default browser, the value will be similar to the following, depending on where you installed Firefox: