Determining which process has a file open with Process Explorer

When I attempted to copy an Outlook .ost file to an external USB flash drive, I saw the message below:

An unexpected error is keeping you from copying the file. If you continue to receive this error, you can use the error code to search for help with this problem.

Error 0x80070021: The process cannot access the file because another process has locked a portion of the file.

I didn't have Outlook open and didn't know what other process was using the file. One way to find out which process has a lock on a file is to use the Process Explorer utility provided by Microsoft. The program is free and you don't need administrator rights on a system to use it. To determine a process that is using the file, you can hit the Ctrl and F keys simultaneously, which will bring up a search box where you can type the name of the relevant file. When you click on the Search button, you should be able to see the name of the process that has a lock on the file as well as the process ID (PID) for that process. E.g., in this case I could see that lync.exe was using the file.

When I tried to update WireShark on a Windows 10 system to version 2.2.4, I saw the message "Wireshark or one of its associated programs is running. Please close it first."

I had to forcibly terminate two Wireshark processes with the Windows Task Manager prior to that message appearing in order to proceed with the upgrade, since I had seen a message that the installation could not proceed with Wireshark running, yet those instances of Wireshark wouldn't close when I tried to close them normally; one of the two was due to my trying a second time to start Wireshark when there was a long delay before it appeared.

I ran the Windows Task Manager with administrator privileges by typing Task Manager in the Cortana "Ask me anything" field and then right-clicking on Task Manager when it was returned in the search results. I saw Dumpcap, which is a process Wireshark and TShark run to perform packet capture, listed in the process list, so clicked on it to select it and then clicked on the End Task button, but that didn't actually terminate the process.

I checked the running processes on a Windows XP Professional system with the tasklist command. I saw a process, jqs.exe, I didn't recognize. I searched for its location on the hard drive and found it at the following location.

At JQS.EXE, I also found that the process is associated with Java.

Experienced computer users might guess that the process is related to Java and that is the case indeed. Jqs.exe is the Java Quick Starter which was designed to improve the startup time of Java applets and applications by prefetching Java Runtime Environment (JRE) files frequently into memory. That's mainly interesting for users who work with Java on a day to day basis. Everyone else might be better of disabling the Java Quick Starter. Think of a user who encounters one Java applet per month (or week), would it make sense to run the process all the time because of those few instances where it might start the application or applet faster? (see also Java Portable on how to use a portable version of Java on the computer)

Jqs.exe is definitely querying the Windows Registry for instance. The performance increase might not be huge but you will free up some computer memory and some I/O processes on the computer system.

When I checked, I found jqs.exe was using about 2 KB of memory on the system.

The ghacks.net webpage also provides instructions for disabling the Java Quick Starter (JQS), if you wish.

Now, if you want to disable the Java Quick Starter process you can do that in the Windows Control Panel. You find a Java entry there which will open the Java Control Panel.

A click on Advanced and the selection of Miscellaneous will display the activated Java Quick Starter entry. Uncheck the box to disable the process. This will be visible in the Windows Task Manager immediately.

You might also be interested in finding out how to run Java Portable which is another option to make sure that no background processes are running.

The image below shows the "Java Quick Starter" option under the Miscellaneous section of the Java Control Panel. Unchecking that option will keep jqs.exe from continually running, if you don't feel you need the Java Quick Starter to be running. 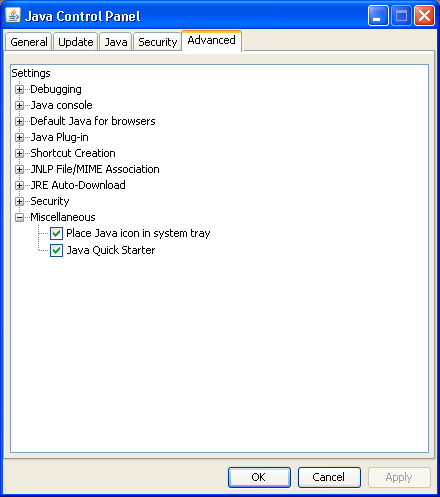 While checking a user's Windows XP system, I found that every time I logged into it a window opened for the installation of HPProductAssistant.

Then another HPProductAssistant window would appear stating "The feature you are trying to use is on a CD-ROM or other removalable disk that is not available" and asking me to "Insert the 'HPProductAssistant' disk and click OK" with "1" appearing in the "use source" field. When I clicked on the browse button, I saw it was looking for hpproductassistant.msi.

If I clicked on the Cancel button, I would see the error message below:

If I clicked on OK, which was the only option, the process would just repeat. Clicking on the Cancel button at the point where it prompted for the HPProductAssistant installation file, just kept the process repeating as well. I had to kill the application through the Task Manager to stop it.

When I checked on what process was associated with the HPProductAssistant in the Task Manager by right-clicking on HPProductAssistant under the Applications tab in the Task Manager and selecting Go To Process , I found it was hpqtra08.exe That file is associated with "HP Digital Imaging Monitor" software and is located in C:\Program Files\HP\Digital Imaging\bin\hpqtra08.exe

When I went to Start, All Programs, and Startup, I found "HP Digital Imaging Monitor" listed there. It was probably put there during the installation of software for the user's printer. HP will install a lot of other software in addition to a printer driver when you use the HP-provided installation disc for one of their printers. Since it wasn't working and I doubted the user had any need for it, I clicked on Start, All Programs and Startup then right-clicked on "HP Digital Imaging Monitor and selected Delete to get rid of the entry from the startup group. I rebooted the system to verify that the problem would no longer occur; it did not.

The file mshta.exe in c:\windwows\system32 is part of the Windows operating system. Known file sizes on Windows XP are 29184 bytes, 30720 bytes, 45568 bytes, 24064 bytes, and 26624 bytes. The description assigned to it by Microsoft is "Microsoft HTML Application Host". The program is needed to execute .HTA (Hypertext Application) files, which allow applications to be run from HTML documents.

On a Windows XP Tablet PC Edition system with Service Pack 2 installed, I see the following information for the file when I right-click on it and select Properties:

At Introduction to HTML Applications (HTAs), Microsoft states the the following in regards to why someone would use HTAs:

Historically, programming languages like C++ and Microsoft Visual Basic have provided the object models and access to system resources that developers demand. With HTAs, Dynamic HTML (DHTML) with script can be added to that list. HTAs not only support everything a Web page does - namely HTML, Cascading Style Sheets (CSS), scripting languages, and behaviors - but also HTA-specific functionality. This added functionality provides control over user interface design and access to the client system. Moreover, run as trusted applications, HTAs are not subject to the same security constraints as Web pages. As with any executable file, the user is asked once, before the HTA is downloaded, whether to save or run the application; if saved to the client machine, it simply runs on demand thereafter. The end result is that an HTA runs like any executable (.exe) written in C++ or Visual Basic.

The .HTA file type can become infected by malware. It is important to note that, as fully trusted applications, HTAs can carry out actions that Internet Explorer would never permit in a Web page. Microsoft also states "In HTAs, the restrictions against allowing script to manipulate the client machine are lifted. For example, all command codes are supported without scripting limitations (see command id). And HTAs have read/write access to the files and system registry on the client machine."

Execution of .HTA files by mshta.exe can be debugged with the Microsoft Script Editor, MSE7.exe.