Spbyot - You are missing administrator rights

After installing Spybot Search & Destroy 1.6.2 through allmyapps, I started Spybot and attempted to peform an immunization, but saw the following error, even though I was logged into an account in the administrator group when I started Spybot.

You are missing administrator rights to perform this action.
If you need to do this, please run this application elevated as an administrtor.

When I started Spybot by right-clicking on its shortcut and choosing "Run as administrator", the immunization performed successfully. 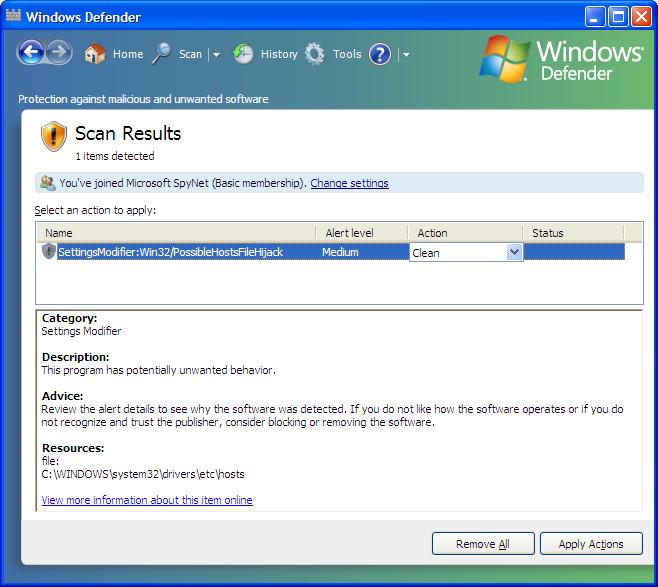 When I scanned a system for malware, BitDefender Free Edition v10 reported the presence of Spyware.Destart.A in Restart.exe, which was in the directory C:\Windows\System32\Tools. I submitted the file to VirusTotal for analysis and also to Jotti's Online Malware Scan. Other antimalware software used by those sites also reported the file as malware. However, after further checking, I believe that the file is actually innocuous.

After a user complained of popup windows advising her to download antivirus software, I checked the system with Spybot Search & Destroy. Spybot found the following malware on the system:

When attempting to update the malware database for Bazooka ™ Adware and Spyware Scanner, a free tool for detecting adware, spyware, trojans, keyloggers, etc. on a system, which is compatible with Windows 95/98/ME/NT/2000/XP, I received the message below:

When I checked the properties of the Bazooka database, bazooka_db.bdb, which is under the system directory of the Bazooka installation folder, by right-clicking on the file and selecting Properties, I found it was marked as "read-only". I unchecked the read-only option and then was able to update the database.

On several systems where I've installed Spybot - Search & Destroy 1.4, I've encountered problems with the popup windows that appear when I've activated TeaTimer, a Spybot application that monitors attempts to change the registry. The buttons on the warning window that appears won't have the correct description of their function written on them, so it is hard to determine what will happen when you click on a particular button.

The problem can be fixed with Resource Hacker.