To obtain an IP address via the Dynamic Host Configuration Protocol (DHCP) on a Knoppix Linux system, you can use pump. As root, you can issue the commands below:

ifconfig eth0 up
pump -i eth0

The options available for pump are shown below:

On an Apple OS X system, a user's account is distinguished from other accounts by a User Identifier (UID), which is a unique number that identifies a particular user on a system having a particular login ID. A UID identifies the owner of a file and controls users' access to files.

A user's name and UID can be viewed with the dscl command utility.

To read a user account, within the terminal type:

Services That Should Normally be Disabled

To increase security on an Apple OS X system, the following services should normally be disabled, unless you have a definite need for them:

The firewall settings can be chaned on a MAC OS X system by taking the following steps: 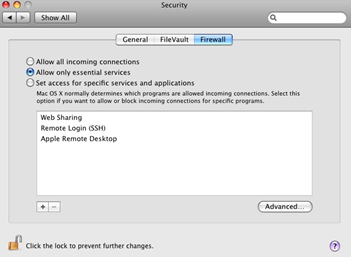 Turning on a service automatically reconfigures the built-in firewall to open the appropriate port(s) necessary for that service.

On Unix and Linux systems, the su command is used to assume the identity of another user, typically root. Since the root account is normally disabled on Mac OS X systems, su will not work. As an alternative to enabling the root account, you can use sudo to run individual commands as root, one at a time. If you need a root shell, you can get one by running sudo -s. The sudo command requires an administrator password.

If you want a graphical user interface (GUI) for the GNU Privacy Guard (GPG) program for Windows, you can use Gpg4win

Importing Data from an Access Database in Microsoft Excel

Wii Network Traffic When Powered On

I've been troubleshooting a problem with a Wii not having network connectivity this weekend. The Wii was plugged into a switch that showed the link was up. The Wii wasn't working when I had it configured for a fixed IP address, gateway address, and DNS server addresses. I tried DHCP, instead, but that didn't work, either. With a sniffer, I could observe the Wii sending out DHCP requests, but I never saw any response coming back from the DHCP server. Yet, I could see other network traffic reaching the Wii. I plugged the cable going into the Datel USB network adapter I was using with the Wii into my laptop and it would get an IP address from the DHCP server, so all of the network cabling seemed to be good. I even installed a driver for the Datel USB to Ethernet network adapter into my laptop and loaded a driver for that adapter on the Windows Vista laptop. That worked as well.

I was able to resolve the problem by putting a small 5-port hub between the switch and the Wii. Everything worked fine then, but I don't know why that worked. I thought there might a problem with autonegotiation of the duplex and speed settings, but on the switch side I tried all possible settings for the duplex setting, i.e. auto, full, and half, with all possible combinations of the speed setting, i.e. auto, 100 Mbs, 10 Mbs, but none of the nine combinations worked.

On a Solaris 7 system, I found there wasn't sufficient space in /var to allow me to install software.

When I checked the contents of /var/log, I found the following:

I moved authlog, maillog, and sshd.log to a a directory under /home, recreated the files in /var/log with touch, set the permissions to 600, and changed the group to what it had been previously on authlog.

I then restarted the syslog daemon so it would use the new files.

When I then checked the free space for /var, 94% of the capacity was used, whereas it had been 100% previously.

If you are using a Knoppix Linux system behind a SOCKS proxy server, you can use the proxychains package to enable applications that don't natively understand how to use a SOCKS proxy to work through the SOCKS proxy. The proxychains program forces any tcp connection made by any given TCP client to go through the specified proxy server (or proxy chain). It is a kind of proxifier. It acts like sockscap / premeo / eborder driver (intercepts TCP calls). Proxychains supports SOCKS4, SOCKS5 and HTTP CONNECT proxy servers. Different proxy types can be mixed in the same chain.

After downloading the proxychains package with Mozilla Firefox, aka iceweasel, I used dpkg to install it.

Proxychains looks for its configuration file in the following order:

The following default information appears in that file:

I was then able to use proxychains with gpg to import a public key for a package repository into the public keyring for the root account.

Knoppix is vased on the Debian distribution of Linux. You can find the particular version of Debian on which it is based by checking /etc/debian_version. 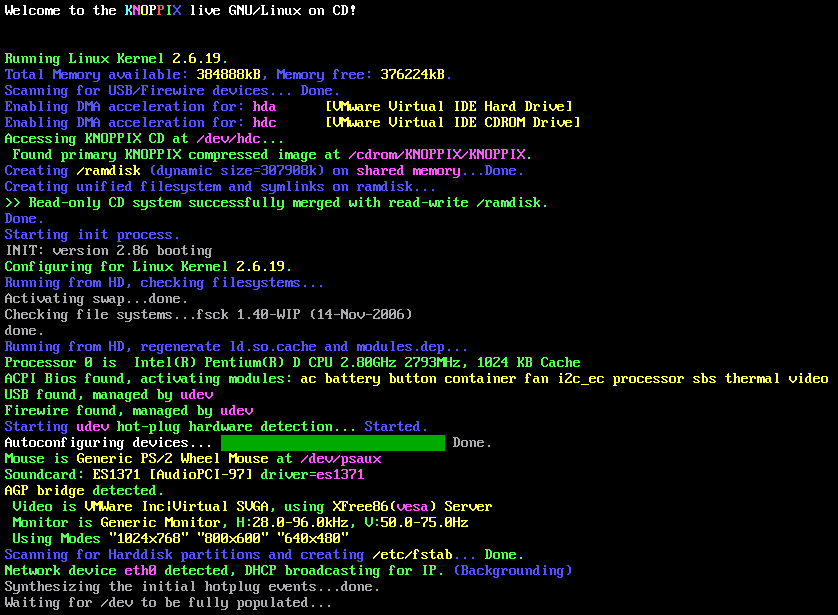