The domain registrar, Joker.com allows you to have email addressed to someone at a domain registered with them forwarded to an email account at another domain. E.g., one could forward email addressed to pamela@example.com to pamela@somewhereelse2.com. Joker.com imposes the following limits for that service: Joker.com provides the option of filtering spam. Hopefully, email rejected as spam doesn't count towards the 200 email messages per day limit.

The service might not be suitable for someone who receives large attachments to messages, because of the 10 MB limit on the size of a message.

Memory Errors Encountered During Testing on 2009-09-26

My wife's Windows XP Professional PC would boot into Windows, but whenever she logged on and tried to do anything, the system would reboot. I ran memory tests on the system with five free programs and one commercial program.

When I checked a webpage for HTML errors using the W3Creg; Markup Validation Service, I saw errors such as the following reported:

The mentioned element is not allowed to appear in the context in which you've placed it; the other mentioned elements are the only ones that are both allowed there and can contain the element mentioned. This might mean that you need a containing element, or possibly that you've forgotten to close a previous element.

The problem occurred because I had placed <hr> between <pre> and </pre> tags. I had something like the following:

I eliminated the error by placing a end pre tag after the first block of text and a begin pre tag before the second block of text.

When I tried pinging the internal email server, mail.example.com, from her system, instead of its internal address, 192.168.0.25, being used, I saw the external address for the firewall was being used. I checked her /windows/system32/drivers/etc/hosts file first. I didn't see any entry for mail.example.com there. Nor did I see the address cached on her system when I entered the command ipconfig /displaydns | find /i "mail.example.com" at a command prompt. So I used a sniffer to observe the network traffic from/to her system. I saw that her system was querying the DNS server configured as the secondary name server for her system, which was an external DNS server provided by her Internet Service Provider (ISP) rather than the internal name server on her LAN.

I tried ipconfig /flushdns, but that made no difference. Her system continued to query the secondary name server and didn't seem to ever cache the address for mail.example.com. When I tried ipconfig /registerdns, the system then queried the primary DNS server again.

The long term solution, though, to prevent the problem recurring would be to set up another internal DNS server to use as the secondary DNS server.

I needed the capability to create an ISO file from a CD on a Windows Vista system. I installed the 64-bit version of ISO Recorder for Vista. Once I had it installed, I was able to create the file I needed by the following steps:

ISO Recorder also then allowed me to right-click on the ISO file and choose "Copy image to CD/DVD" to create another copy of the CD. 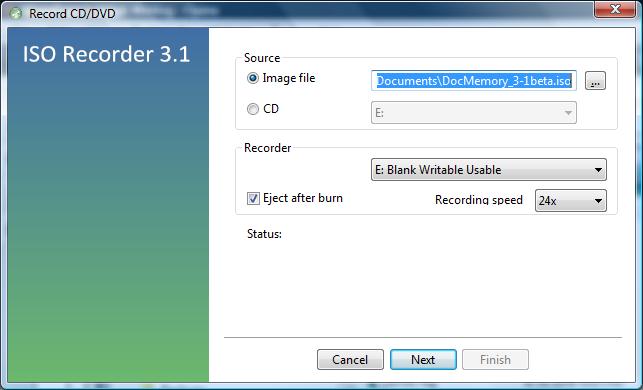 Calculating the Number of Days Between Two Dates in Excel

The datedif function can be used in Microsoft Excel to calculate the number of days between 2 different dates.

The syntax for the DATEDIF function is as follows:

Date1 is the first date,
Date2 is the second date,
Interval is the interval type to return.

If Interval is not one of the items listed in above, DATEDIF will return a #NUM error.

File System not Supported on This Device Optimized for Removal

I was unable to backup a disk drive to an external drive attached to a system via a USB connection using the NTBackup program. The backup failed once the backup file reached 4 GB in size, which is the maximum size for the FAT32 file system, which was the file system on the Western Digital My Book USB external drive when I purchased it. So I decided to change the file system to NTFS by reformatting the drive. But I received an error message when I tried to convert the file system.

To change the file system, I right-clicked on the drive under My Computer, then chose Properties. 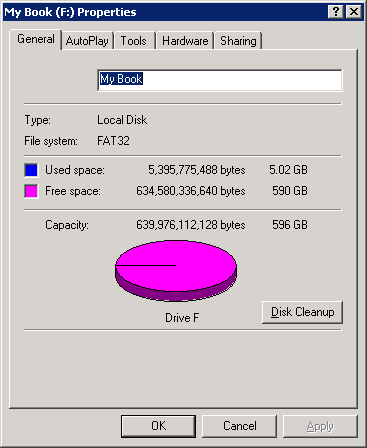 I then clicked on the Hardware tab and selected the drive. 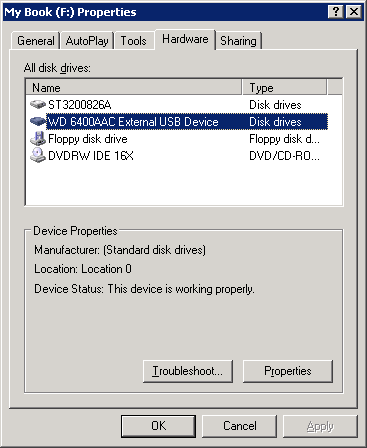 I then clicked on the Properties button and then the Policies tab. I changed the setting from "Optimize for quick removal" to "Optimize for performance". The "optimize for quick removal" setting disables write caching on the disk and in Windows, so you can disconnect the device without using the Safe Removal icon. The "optimize for performance" setting enables write caching in Windows to improve disk performance. When you choose this option, to disconnect the device from the computer, you should click the "Safely Remove Hardware" icon in the taskbar notification area." 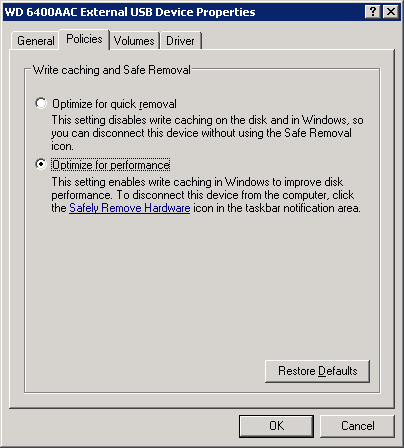 I was then able to reformat the drive from the FAT32 file system to the NTFS file system.

A family member got an offer to become a beta tester for Hello Kitty Online today. The email message she received provided a link to download a setup program HKO_Downloader.exe. After she downloaded the file, I had her submit it to Virustotal , a site that checks files for malware with multiple antivirus programs. The Virustotal analysis of the file showed 2 of the 41 programs it used to check the file reporting a potential issue with the file. Note: someone else had uploaded a file named HKO_Island_of_Fun.exe on September 3, 2009 that Virustotal identified as being an identical file because that file had an identical hash value.

The two that identified the file as potentially being malware were as follows:

The HKO_Downloader.exe file downloads the actual software needed to participate in Hello Kitty Online, which is a site run by Aeria Games. I concluded that they may have licensed a downloading program that some others may use for nefarious purposes, but I didn't see sufficient reason to be concerned in this case and told her she could download the software and participate in the beta testing.

While checking a "Virtual Memory Minimum Too Low" warning message on a Windows XP system, I found the following HP processes running:

According to the Uniblue Process Library:

hpqnrs08.exe hpqnrs08.exe is a Network Monitor from Hewlett-Packard Development Company, L.P. belonging to HP Digital Imaging. This is a network device rediscovery service.