The Multi Virus Cleaner antivirus program can be placed on a rescue CD, such as the AVG Rescue CD as an additional anvirus tool.

Once you've got the software on the rescue CD and have booted the target system, i.e. the one you need to scan for viruses or other malware, you will need to copy the directory in which it is located from the CD onto the drive created in memory on the system, or onto a USB drive, such as a thumb drive, attached to the system in order to run it. If you attempt to run the software directly from the rescue CD, you will receive the error message "Unable to load signatures file." But you can run it if you copy it to the RAM drive creatied from the system's memory, e.g. drive Z. You can then go to that directory using the FreeCommander program on the AVG Rescue CD and start the MVC program by double-clicking on MVC.exe. 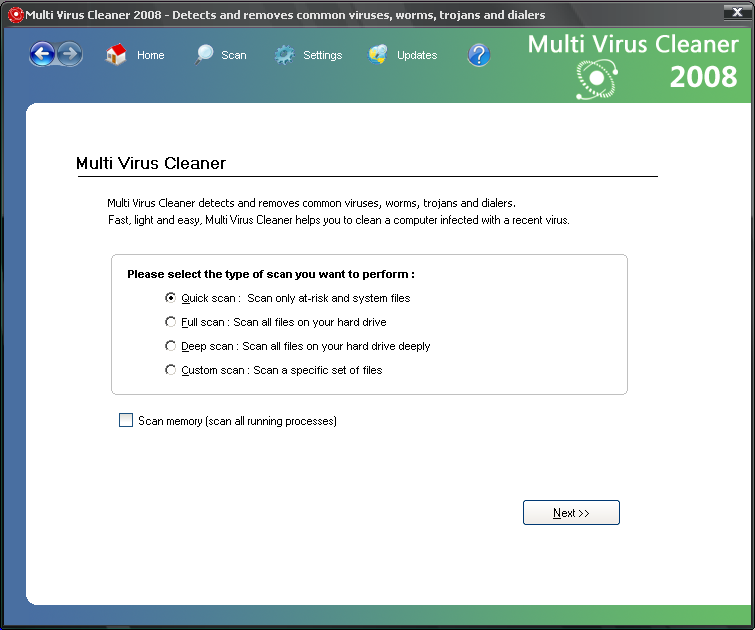 When the program starts you will be prompted to perform one of the following scans:

You can click on Settings to chose what to do when an infected file is detected. The default option is to ask the user what action should be performed.

If you click on Updates you can choose to download the latest version of Multi Virus Cleaner for free. The date on the signatures file is displayed at this window.

If you are running the software from the rescue CD, click on Custom scan on the startup window, which you can reach by clicking on the Home button. Then click on the Next button and select drive C, i.e. the partition on which Windows is loaded on the hard drive, then click on the Scan button.

MVC will report it has found an infected file ENGINE.DLL in the C:\AVG_Rescue_Temp directory with the virus "EICAR TEST STRING (SAFE)". Click on the Ignore button, since this is just a test file many antivirus programs, such as the AVG Rescue CD antivirus program, use to verify that antivirus software is working.

I use the AVG Rescue CD for scanning infected systems for viruses. It is especially useful for checking systems that are so badly infected that they are essentially unusable. The rescue CD allows one to boot into a version of Windows stored on a CD, bypassing the infected version of Windows on the hard disk.

The steps for creating an AVG Rescue CD are listed here.

I had hidden the "owner" account from being visible at the Windows XP Welcome Screen on a laptop running Windows XP Home Edition Service Pack 2 (see Hiding an Account from the Welcome Screen). "Fast User Switching" was turned on, so I could switch from one account to another. I could hit Ctrl-Alt-Del to bring up a login prompt that would allow me to input the userid of "owner" and the password for that account, but that would only work if no other account was logged on already. I could run programs from the command prompt by using the runas command, but there were times when I also wanted to be able to switch to that account and use it with a GUI interface, so I decided to "unhide" the account.

You can use regedit, which provides a GUI interface for editing the registry or you can use the reg command at a command prompt to query and modify the registry.

I then used the reg query command to check the current registry entry applying to the "owner" account that kept it from being visible at the welcome screen for Windows XP.

A value of zero in the key HKLM\software\microsoft\windows nt\CurrentVersion\Winlogon\SpecialAccounts\UserList\userid means the account represented by userid won't be visible at the Welcome Screen. If you put a value of one there, then the account will be visible.

I was then able to use the Windows logo key + L to obtain the welcome screen where I could now see the "Owner" account listed as one of those I could select.

If you visit Ciruit City's website today, you will find the homepage has been replaced by a notice that the company is closing its stores in the U.S. The homepage states that 34,000 employees will be losing their jobs as a result of this action. The webpage states "Due to challenges to our business and the continued bleak economic environment, Circuit City is going out of business and the company's assets will be liquidated to pay off creditors."

The company provides a brief history for itself on the page stating "Founded in 1949 as the Wards Company, Circuit City is headquartered in Richmond, Virginia. At the time of the liquidation announcement (January 16, 2009), the company operated 567 stores in 153 media markets in the U.S. and approximately 765 retail stores and dealer outlets in Canada."

Circuit City made the announcement that they are going out of business on January 16 and stated that closing sales will start as early as January 17, 2009 with the expectation that they will conclude by the end of March. The stores will be closed when the liquidation sales are completed.

The announcement also states that associates at the company's headquarters have been asked to return today, Monday, January 19 to find out more about their status and to retrieve their personal belongings.

One thing I really liked about Chrome is that a problem in one tab doesn't lead to the whole browser crashing. Each tab is associated with a separate process, unlike for other browsers, such as Firefox and versions of Internet Explorer prior to version 8. I haven't tried Internet Explorer 8 yet, but I've long been aggravated by Internet Explorer's tendency to crash due to a problem with one webpage. I tend to have many webpages open at once and I like to be able to retrace my steps leading to a particular webpage by using the back button. I've always liked Opera's ability to reopen the browser after a crash and have all of my tabs restored, plus be able to backup within a tab to view webpages I've visited to get to the current one.

The Windows version of Gnu Privacy Guard (GPG) stores keyrings for users under the directory C:\Documents and Settings\username\Application Data\gnupg on a Windows XP system, where username is the username for the account under which the user logs into the system.

You can create new empty keyrings with gpg --list-keys.

Note: gpg uses the forward slash, "/", which is used on Unix, Linux, and other operating systems to separate directories, in its output, though Windows actually uses a backward slash, "\".

If you need to transfer keyrings from a Linux or Unix system to a Windows system, the keyrings are likely to be stored in ~/.gnupg on that system, i.e. in a .gnupg beneath a user's home directory. Transfer the .gpg files, i.e. pubring.gpg, secring.gpg, trustdb.gpg

To import someone's public key into the public keyring, you can use the instructions at Importing a Public Key with GPG.

While trying to access a spreadsheet I maintain on Google Docs, received the message:

... but your query looks similar to automated requests from a computer virus or spyware application. To protect our users, we can't process your request right now.

We'll restore your access as quickly as possible, so try again soon. In the meantime, if you suspect that your computer or network has been infected, you might want to run a virus checker or spyware remover to make sure that your systems are free of viruses and other spurious software.

If you're continually receiving this error, you may be able to resolve the problem by deleting your Google cookie and revisiting Google. For browser-specific instructions, please consult your browser's online support center.

I had been accessing the spreadsheet, but when I attempted to enter a value in one of its cells, I kept getting a message stating I was leaving a secure connection. I would click on OK and the message would keep repeating until I finally got the message above..

I first tried deleting the Google cookies I found on the PC I was using. I was using Internet Explorer (IE), so the cookies were in C:\Documents and Settings\Username\Cookies, where Username was the account I was logged into the PC under. I deleted the following cookies and logged out of Google Docs, but still got the message about a virus or spyware application:

To have FTP Voyager run scheduled transfers automatically, it should be configured to run as a system service. Otherwise, it won't start when the system is rebooted and will need to be manually started.

Rhino Software, Inc., the developer of FTP Voyager, provides information on configuring the software to run automatically as a service at Running FTP Voyager Scheduler as a System Service, which states the following:

FTP Voyager Scheduler can be configured to run as a system service by checking the box under View | Options | General | Run as a System Service. It is important to note that if you did not select this option at installation, you will need to uninstall and reinstall FTP Voyager before this will work properly. Instructions for backing up FTP Voyager settings can be found in KB article 1189

In version 12.3.0.1 of FTP Voyager, you can take the following steps to run FTP Voyager Scheduler as a system service. 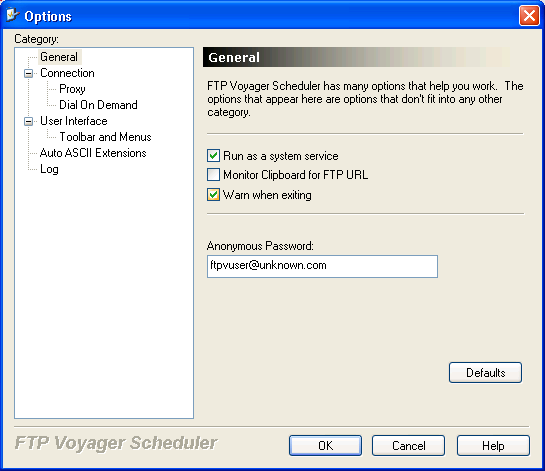 To verify the software is configured to run as a system service, you can type services.msc at a command prompt. You should see a Startup Type of "automatic" next to FTP Voyager Scheduler.