To turn off Outlook's popup alerts telling you that new mail has arrived, take the following steps in Outlook: 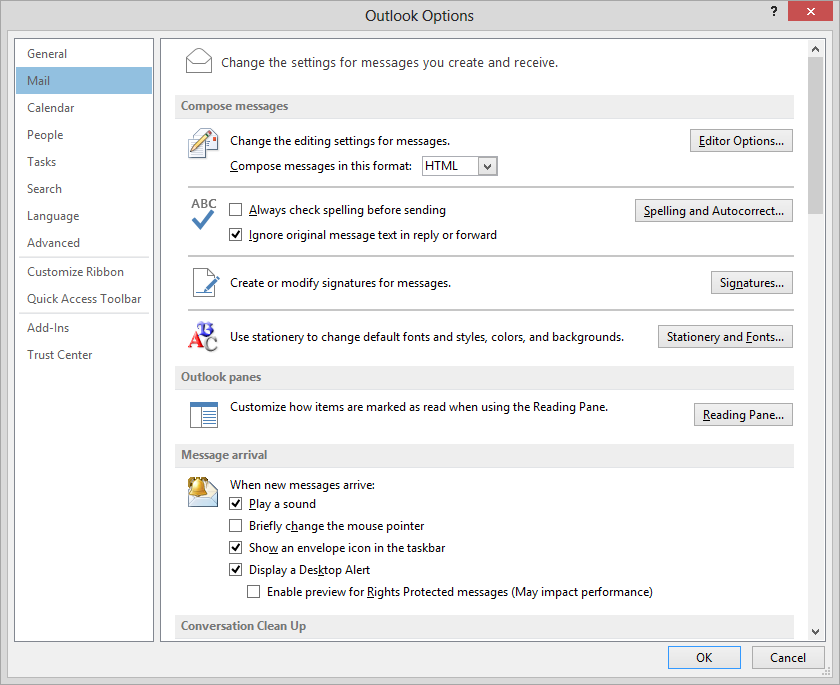 Thunderbird was not showing some folders listed for an email account on an an IMAP server. In order to get them to display on the PC on which I was running Thunderbird 17.0.4, within Thunderbird I clicked on File, then selected Subscribe. I then saw a folder list with "Select the folders to subscribe to" displayed above the folders on the IMAMP server for the account. I checked the boxes to the right of the ones that weren't displaying. For some folders that had subfolders, I had to click on the rightward pointing arrowhead to the left of the folder to display the subfolders and their checkboxes.

I installed WinAmp 5.63 on a family member's Windows 8 system She wanted to add Live365 as a service to it. I had written instructions for doing that for Winamp 5.552 previously at Adding Live365 to WinAmp's Online Services List. I found that I had to modify the procedure slightly for Winamp 5.63. I found ml_online.ini was now in C:\Users\Username\AppData\Roaming\Winamp\Plugins\ml where Username was the user's account name. The ml_online.ini file contained the following lines:

Beneath the C:\Users\Username\AppData\Roaming\Winamp\Plugins\ml directory was an omServices subdirectory with files named omService_{0000xxxxxx}.ini where xxxxxx was a sequence of digits, e.g., omService_{0000221836}.ini, which had the following lines in it.

I put a 365.png file to serve as an icon in C:\Users\Username\AppData\Roaming\Winamp\Plugins\ml\omServices and created a file omService_{0000000365}.ini and put the following lines in it.

When I did so and reopened Winamp, I found that the ml_online.ini had 365 added to the order line as shown below:

Live365 was then at the bottom of the list of online services in WinAmp.

An alternative method of closing one of the applications is to hit Ctrl-Alt-Del to bring up the Windows Task Manager and then select the application to close by clicking on it and then choosing End Task.

To change the background that appears on a Windows 8 system when the system is locked, i.e., when it is waiting for you to enter the userid and password, you can follow the steps below. By default, the system shows a stylized image of the Seattle Tower in Seattle, Washington in the U.S.

If you wish to change the picture that appears for your account, you can follow the same procedure as above, but choose Account picture, instead of Lock screen. An image can be displayed as a small 96 x 96 pixel image, a large 448 x 448 pixel image, or a video (dynamic image) - see Guidelines for user names and account pictures (Windows).

You can also change the Start Screen colors by choosing Start screen.

If you wish to add a shortcut to the Windows 8 Start Screen so that you can click on an icon on the Start Screen to go to the URL for a website, you can do so by taking the following steps using Internet Explorer 10.

Sending a Test Message When Setting Up Outlook 2013

While setting up a POP3 account for a user using Microsoft Outlook 2013, I received the message below when I clicked on Test Account Settings:

I found a June 18, 2012 posting by CharlieBrady at Email configuration who stated the problem can occur because there is a bug in Outlook 2013's "test email" function.

Unfortunately, this is what you should expect to see. Outlook has a bug in its "test email" function. It sends a test message with an illegal format - it has no "Date" header. This is documented in the wiki:

SME server does not accept those illegal messages, as such messages are usually spam. Legitimate mail clients do not generate such messages.

So I unchecked "Automatically test account settngs when Next is clicked" and proceeded to complete the setup of the email account for the user. After it was set up, I sent an email using Outlook 2013 from the account to two other addresses, one outside the user's email server, which uses Sendmail to send email, and verified that both were received.

When trying to set up Microsoft Outlook 2013 for a user to use a Microsoft Exchange 2003 server, I received the following message:

The resource that you are trying to use is located on an unsupported version of Microsoft Exchange. Contact your e-mail administrator for assistance.

That was followed by the message below:

Cannot start Microsoft Outlook. Cannot open the Outlook window. The set of folders cannot be opened. The file C:\Users\JDoe\AppData\Local\Microsoft\Outlook\JDoe@example.com.ost is not an Outlook data file (.ost).

At Office 2013 known issues, I found the following:

Adding a Tile to the Windows 8 Start Screen

If you wish to add a tile to the Microsoft Windows 8 Start Screen, you can do so by clicking on the Start button which will appear at the lower, left-hand corner of the screen when you move the mouse there, and then typing the name of the application you wish to add or by right-clicking on an empty area of the desktop and then clicking on All Apps when it appears at the lower, right-hand corner of the screen, which will show all applications. Once you see the application you wish to add to the Start Screen, right-click on it and select Pin to Start. The item will then appear on the Start Screen at the end of the entries when you scroll to the right. If you wish to add it to a particular group of tiles you can drag it to an existing group or create a new group by following the instructions at Creating Application Groups in Windows 8.