Microsoft® Excel® for Mac 2011 (Version 14.6.0) crashed and when it reopened it crashed again. When it reopened, I saw the message "Microsoft Excel quit unexpectedly. Click Reopen to open the application again. Click Report to see more detailed information and send a report to Apple."

I was able to stop it from continually crashing by choosing not to reopen all of the spreadsheets that had previously been opened. When it displayed the message "This workbook contains macros. Do you want to disable macros before opening the file?", I chose "Do Not Open" for some of the workbooks that previously had been open. 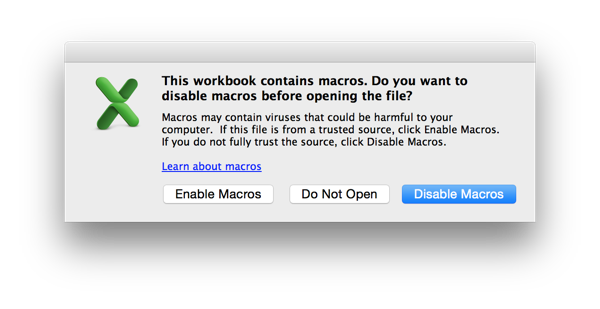 I was then able to successfully open the application and continue working on other workbooks that had been open in Excel.

I checked for the crash logs related to the problem in ~/Library/Logs/DiagnosticReport. I saw two crash reports for today, March 11, 2016.

When I checked both Excel crash reports, I found that the cause was logged as a stack overflow. I looked for the line that immediately follows the "Application Specific Information:" line in the files, which is why I used the -A 1 argument to the grep command.