When I went to Settings then Update & Security on a computer running Microsoft Windows 10 to update it to Windows 11, I saw the message "This PC doesn't currently meet the minimum system requirements to run Windows 11" and "Get the details and see if there are things you can do in the PC Health Check app." So I clicked on the " Get PC Health Check" link and downloaded and installed the application. When I ran the program, it reported "This PC doesn't currently meet Windows 11 system requirements" and provided details as to why that assessment was made. The system has adequate memory, disk space, and a 3.9 GHz processor (the minimum processor speed required is 1 GHz) with 3 cores (2 or more are required), but there was a warning that "This PC must support Secure Boot" and "TPM 2.0 must be supported and enabled on this PC." Secure Boot is a Unified Extensible Firmware Interface (UEFI)" specification. The system is configured for UEFI booting but, even if it wasn't, the October 11, 2021 article How to Install Windows 11 on Legacy BIOS without Secure Boot or TPM 2.0 by Parth Sawhney provides a workaround for systems booting from Basic Input/Output System (BIOS), which UEFI replaced. 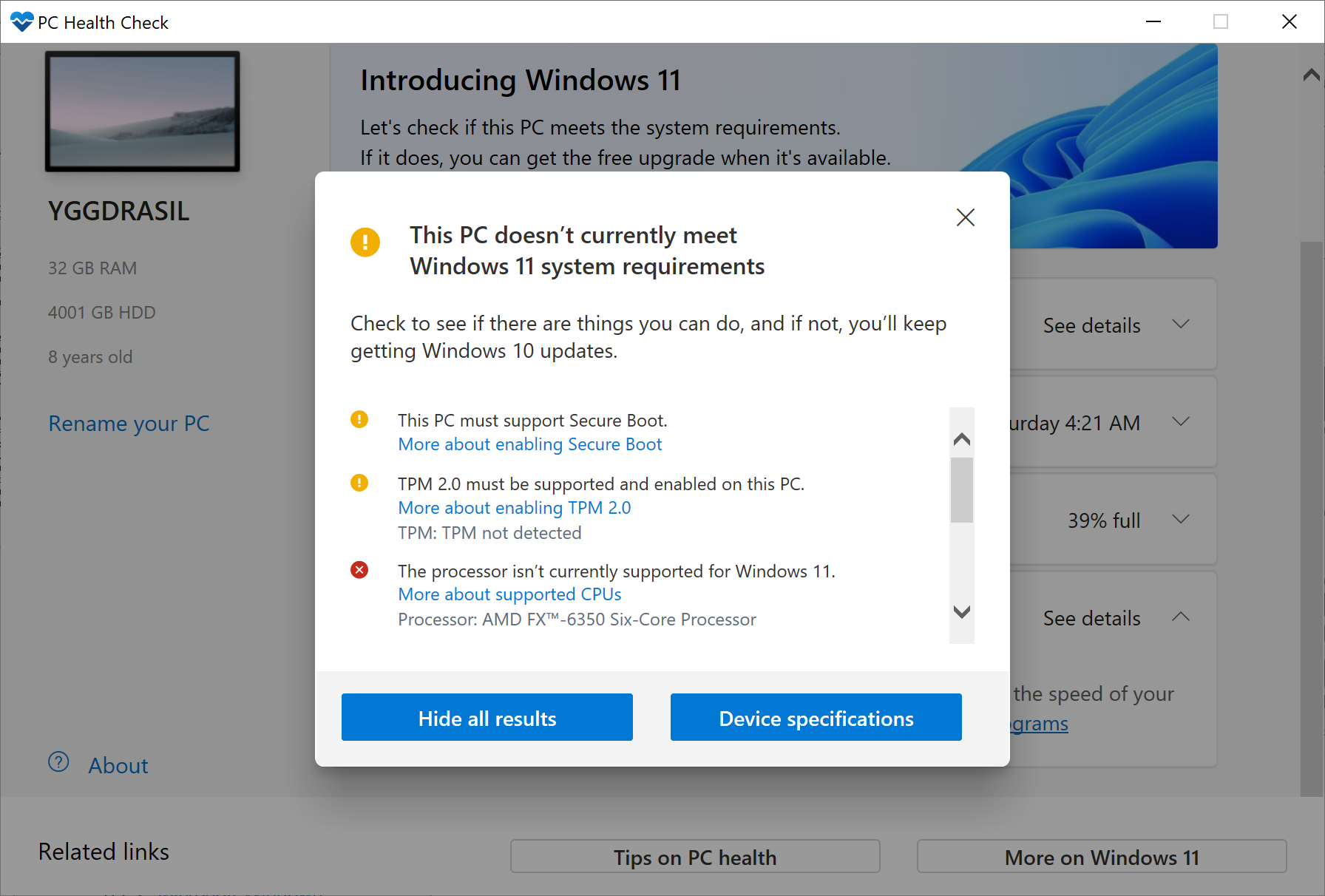 But the indication that the AMD FX™-6350 Six-Core Processor was not supported seemed a showstopper. I also checked the June 29, 2021 List of Intel and AMD Processors NOT Supported by Windows 11 by Shivam Malani and found the FX-6350 processor is also listed there. The author of that article notes “there’s an endless list of processors that Windows 11 doesn’t support. Even systems capable of flawlessly running high-end games aren’t eligible for Windows 11 due to the limited hardware support” and states that if a system is more than four years old that it is very less likely to be among systems that can be upgraded to Windows 11. A list of Advanced Micro Devices (AMD) processors supported in Windows 11 can be found in the December 2, 2021 article Windows 11 supported AMD processors on the Microsoft Docs website.

You can obtain brief details on a system's processor through Windows Management Instrumentation Command-line (WMIC) at a command prompt inteface.

You can check the full details on a processor from a command-line interface (CLI) with wmic cpu list /format:list.