Setting the path variable for Java

I had installed Java on a Windows 10 system as part of the installation of the Eclipse integrated development environment (IDE), which did not add the directory where the java.exe and javac.exe executable files were installed. I could temporarily add the directory where Eclipse installed those files to the path environment variable—see Running java from an Eclipse installation from the command line—but I didn't want to continue to have to do that every time I wanted to compile a Java program at a command prompt or run one from a command-line interface (CLI). So I added the path to the executable files to the system-wide path environment variable so it would be permanent and apply to all accounts on the system.

While trying to set up Gradle, a software develpment build automation tool, on a Microsoft Windows 10 system, when I ran the gradle.bat file in the gradle bin directory, I saw the message below:

I had installed Java with the Eclipse integrated development environment (IDE) previously and the java.exe executable was installed beneath the C:\Users\Jim\.p2\pool\plugins\org.eclipse.justj.openjdk.hotspot.jre.full.win32.x86_64_18.0.1.v20220515-1614\jre\ directory, so I created a JAVA_HOME environment variable pointing to that directory that applied to all accounts on the system. You can create a temporary JAVA_HOME environment variable for the account under which you are currently logged in from a command line interface (CLI) as noted at Running java from an Eclipse installation from the command line, but I wanted to create a permanent environment variable so I typed advanced system settings in the Windows "Type here to search" field and then clicked on View advanced system settings when I saw that listed.

I inherited an Excel spreadsheet containing names and addresses for all the members of an organization where all the letters for the names and addresses were capitalized. I wanted to convert the names and addresses to "proper case" where only the first letters of names, streets, and cities are capitalized (in the Python programming language proper case is known as "title case"). Fortunately, Excel provides a function, propercase, to perform that function. To perform the conversion, I inserted a new column to the right of each of the columns where all uppercase letters were used. The first column in the Excel workbook contained the last names for the members. There was a header titled "Last Name" in cell A1 with the first person's last name appearing in cell A2, so in the newly inserted column, B, I put =proper(A2) in cell B2. When I hit Enter, instead of AIKIN, JR in A2, I then had Aikin, Jr in B2. I then clicked in cell B2 and dragged the mouse pointer downwards to the last row containing a member's contact information, which resulted in all the members last names being placed in column B with the proper case, i.e., uppercase letters for the first letter of the name and lowercase letters for the rest of the name. I couldn't just delete column A then, which would cause a #REF! message to appear in column B for every name, since I was using a formula that depended on a value being in column A. So, instead, I copied all of column B by clicking on the B at the top of the column to highlight all entries in the column. I then used the Ctrl-C keys to copy all of the entries. I then needed to paste the values in column B into column A, rather than pasting in the formulas. You can do so, by right-clicking on the column designator letter, i.e.the A for column A in this case, and then choosing the appropriate paste option, To paste just the values and not the formulas and formatting, you can click on the icon of a clipboard with "123" on it.

Or you can select Paste Special and then click on the same icon that appears beneath Paste Values. 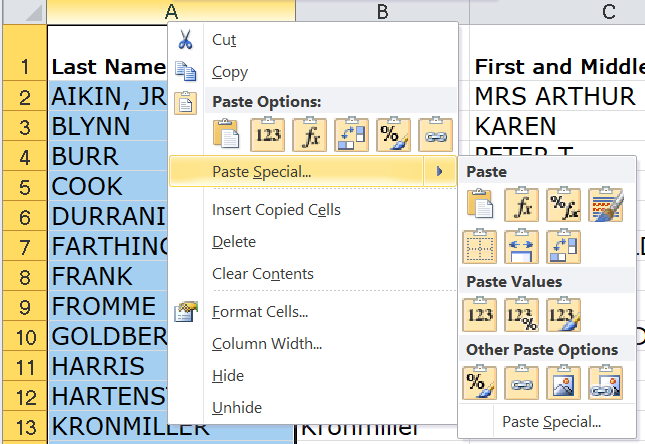 Once you've pasted the values that are in proper case, you can delete the column, e.g., B in this case, where the formulas are used.

Note: for addresses with Post Office boxes, any instance of "PO BOX" would be replaced with "Po Box," but you can use Excel's find and replace feature to search for all instances of "Po Box" and have it replace all those occurences with "PO Box".

I hadn't used PeaZip as a backup utility previously, but after reading about the program, I thought it would be well-suited to copy a directory containing about 37 GB of files on a Microsoft Windows Small Business Server (SBS) 2003 server to an external USB drive so that I could transfer the directory, which was shared over the network from the server, to the new 2022 server I was setting up to replace the outdated server. I downloaded the portable version, PeaZip Portable to a USB flash drive and when I started the program, I specified the external USB drive as the location for the .tar archive I wished to create, but when the PeaZip program showed it was progressing with the backup, I did not see the archive file on that external drive. After some time wondering whether PeaZip was actually creating the tar file, I wondered whether it might be creating a temporary file elsewhere, so from a command prompt, I checked the location Windows was using to store temporary files for the account I was using with echo %temp% and, when I checked that location, found a .tar.tmp file that PeaZip was using for the ongoing archive process. Unfortunately, that temporary file was in a directory on drive C that I knew did not have enough free space left to accomodate the archive file as PeaZip progressed further, so I had to delete a lot of files from that drive and mover others there so that I would not have to restart the archive process.

Running java from an Eclipse installation from the command line

For an introductory Java class I am taking, I installed the Eclipse integrated development environment (IDE) on a Microsoft Windows 10 system. In addition to compiling and running Java programs through the IDE, though, I wanted to compile Java programs using the Java compiler, javac.exe, and run them using java.exe from Windows' command-line interface (CLI). The installation process for Eclipse installed the javac.exe and java.exe executables in a user directory with a long directory path to those executables. Note: you should install the Eclipse IDE from the account which you wish to use to compile and run java programs. The location wasn't added to the path environment variable, so if you try to run the programs from a command prompt, you will see the following, unless you specify the full path name where the executable files are located.

I didn't want to have to copy and paste the full path on the command line or type it in every time I wanted to use the two executables from the command line. To avoid that problem you can add the directory path to the path environment variable through a set path= command or create another environment variable, e.g., JAVA_HOME that points to the directory where the two files are located, though both methods apply only to a particular command line instance. I.e., if you close a command prompt window where you've set one of the variables to include the location where Eclipse installed java.exe and javac.exe then open another command prompt window, you will have to set the environment variable again in the new instance. An alternative way to make a permanent path change from a command prompt interface is to use the Windows setx command, though I would not recommend it, since if your path variable already has a path that is more than 1,024 characters long, setx can truncate the path to 1,024 characters, so that you not only don't get the additional directory added to the path, but you may lose some of the path setting you had prior to issuing the command. If you want to make a permanent change, see responses to the "Overcoming the 1024 character limit with setx" posting at the superuser.com site.