Raising a number to a power in Microsoft Excel

There are two ways to use exponentiation, i.e., to raise a number to a power in the Microsoft Excel spreadsheet program. You can use the POWER(number, exponent) function, e.g., to raise 2 to the power 3, you could put =POWER(2,3) in a cell which would yield the value 8. Or you can use the exponent operator, the caret character, i.e., ^ (shift-6 on a Windows keyboard). E.g., to calculate 2 raised to the power 3 you could put =2^3 in a cell which produces the value 8.

Microsoft Excel 2007 crashed on a laptop running Windows 10 that I was using. When I restarted Excel, I found that, unfortunately, I had lost all of the recent changes I had made to a spreadsheet, even though Excel put "(version 1).xlsb [Autosaved]" in the title of the spreadsheet I had been working on when I restarted Excel—-it crashed when I attempted to paste a webpage URL into a Hyperlink field. The crash and loss of my recent work was aggravating, so I decided to change the frequency with which Excel auomatically saves a file in an AutoRecover version that will allow you to automatically recover a document if if the program hangs or crashes. To change that setting for Excel 2007 on a Windows system, you can click on the Office Button at the top, left-hand corner of the Excel window (it is to the left of the "Home" tab as shown below). 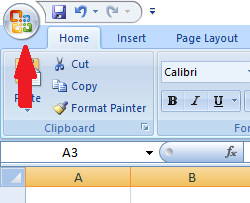 Then click on the Excel Options button and select the Save option. The checkbox for "Save AutoRecover information every" should be checked. You can then change the frequency from 10 minutes to a more frequent number; I chose to have Excel automatically save a document every 5 minutes. 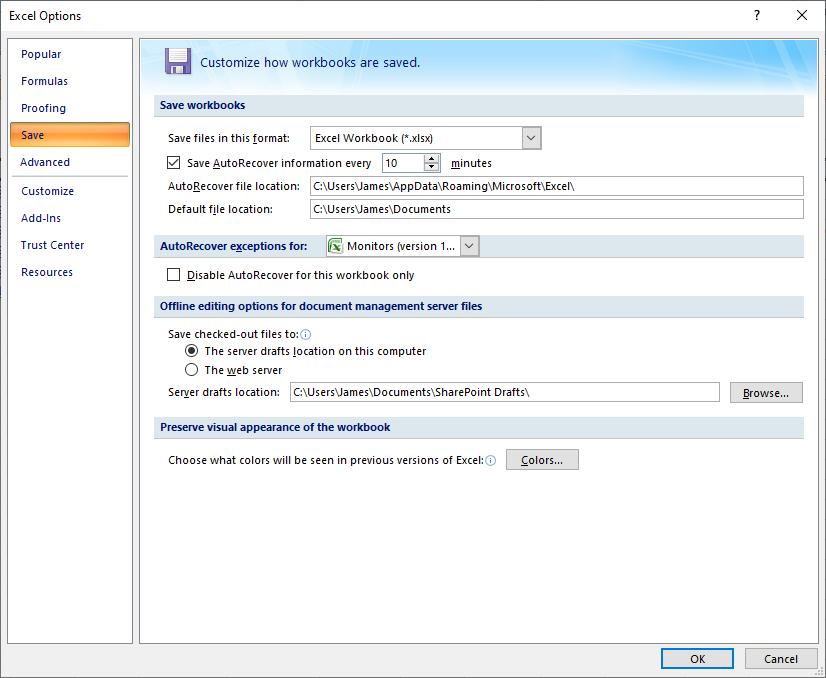 In the Microsoft Excel spreadsheet program, if you wish to create a dropdown list where a user can select options from the list for a cell's value, you can take the steps below:

In cells where you have chosen to present a dropdown list to a user, when the user clicks on the cell or tabs into it, he/she will see a small box with a downward pointing arrowhead appear to the right of the cell. The user can then either type a value in the field or he/she can chose a value from the dropdown list by clicking on the small box with the downard pointing arrowhead. If the user types a value that isn't in the list rather than selecting from the dropdown list, when the user hits enter or moves the cursor out of the cell, he/she will see the message "The value you entered is not valid. A user has restricted values that can be entered in this cell."