Correcting "Windows Installer Service could not be accessed" Problem

When I tried to install Norton Ghost 7.5 on a Windows Small Business Server (SBS) 2003 server, I received the message below:

I downloaded Windows Installer 3.1 Redistributable (v2) From Microsoft's Download Center and installed it, but I got the same results when I tried to reinstall Symantec Ghost 7.5.

Microsoft's article, "Error 1719: The Windows Installer service could not be accessed" error message when you try to add or remove a program states the behavior may occur if the following conditions are true:

Microsoft's article recommends steps to resolve the problem. You should first determine the location of the file msiexec.exe on your system. The file will be in the Windows system32 directory, which is usually either C:\Windows\system32 or C:\WINNT\system32 for versions of Windows after Windows 98. For Windows 98 the file is usually in C:\Windows\System. You can search for the file or you can determine the Windows directory by obtaining a command prompt and checking the value of the %WINDIR% environment variable with echo %WINDIR%, which will tell you which directory is the Windows directory on a system. You can then verify that msiexec.exe is in that directory.

You then need to check the registry to make sure that HKEY_LOCAL_MACHINE\SYSTEM\CurrentControlSet\Services\MSIServer\ImagePath has a value that corresponds to the actual location of the msiexec.exe file on the system. You can do so using the regedit command or using a reg query command from a command prompt.

Once you've logged into an administrator account on the system in Safe Mode, you will need to use the following procedure:

Note: For 64-bit operating systems, you also need to reregister the 64-bit MSI installer. To do this, click Start, click Run, type the following line, and then click OK:

Once you have reregistered the msiexec.exe file, you will need to reboot into standard mode. Then try the installation process again that failed previously. If that fails, Microsoft does offer another alternative for dealing with the problem. See "Method 2" at "Error 1719: The Windows Installer service could not be accessed" error message when you try to add or remove a program.

In my case, I was then able to successfully reinstall Symantec Ghost 7.5 on the system, though I did receive another error at the end of the process that was not associated with the previous installer problem. The error I received at the end is shown below.

On Monday, a user called me to report that she was seeing "Unable to obtain IP address via DHCP. Network initialization failed: the DOS-mode client cannot proceed." messages on one of her company's PCs. Rebooting the system did not help. When I booted the system this evening, I saw the following appear on the system's screen during the boot process:

The last two lines continued to repeat. I hit Ctrl-C to break out of the loop, which yielded a C:\GHOST> prompt. I realized then that the Ghost backup process that normally runs on the weekend encountered a problem. A Ghost 7.5 server normally starts a backup of the system on the weekend by contacting the Ghost client software on the system and instructing it to reboot into a Ghost virtual partition. When the backup process completes, the system will reboot into Windows. But, in this case, something went wrong.

At the prompt, I typed ngctdos -hide and hit Enter to "hide" the Ghost virtual boot partition and restart the system normally.

After replacing the motherboard in a Gateway PC, I had to update the template used by Norton Ghost 7.5 to reflect the network controller built into the motherboard of the new system. The built-in controller was a Realtek RTL8139 Family PCI Fast Ethernet NIC. I've included the necessary NDIS2 driver and instructions for configuring Ghost 7.5 to use it at Norton Ghost 7.5 - Realtek RTL8139 NIC

I know that sometimes a CD or DVD drive will have problems with discs from a particular manufacturer, so perhaps the external HP DVD ROM drive (p/n: PA509A#ABA) was having a problem reading the Office Depot CD-R discs I had put Ghost on, but that shouldn't have any bearing on Ghost aborting when I tried to start it to backup the disk drive. I was able to boot the laptop using the external DVD-ROM drive with an Ubuntu Linux LiveCD.

I use Symantec's Ghost 2003 to create image backups of disk drives. Since the Ghost 2003 Boot Wizard can't create bootable CD's, only boot floppy disks, I create a boot floppy disk and then use a program like Nero or Roxio Easy Easy CD Creator, which can create boot CDs from floppy diskettes, to create a Ghost 2003 boot CD (see Procedure for Generating Norton Ghost Bootable CD for procedure to use with Roxio's Easy CD and DVD Creator 6). When I booted systems from the boot CD's I created I would see the message below:

I would hit F and the boot process would proceed. If I hit R, I would get the same message again. Hitting A for "Abort" would allow me to proceed to running Ghost, but the mouse driver wouldn't load. If I hit F8 just as I was booting from the Ghost 2003 boot CD, I could walk through the commands in config.sys and autoexec.bat, which allowed me to see that the error occurred just as the mouse driver was being loaded.

I didn't know how to eliminate the error until I found the cause of the problem described by eASYkILL in a posting at Ghost 2003 Multi-Boot CD (Abort,Retry,Fail) error. He posted the following information:

So here is the deal... MOUSE.COM is trying to create a MOUSE.INI file and because you created a bootable CD (read-only) it is unable to write the file and gives the error message (Abort, Retry, Fail). If you fail, you can continue just fine with mouse support.

The solution... add a MOUSE.INI to your floppy that you are creating the image from. If you booted from the floppy at least once, this problem doesn't occur because the file is created. That may be how it went away for you. Just re-create the bootable CD from the floppy with mouse.ini added.

Since most of the systems on which I'm performing the Ghost 2003 image backups have a mouse attached by the PS/2 mouse port, I thought that should work fine. So I used Notepad to create a mouse.ini file with the above lines on one of the Ghost 2003 boot floppy disks (be sure to change the "save as type" to "all files", if using the Windows Notepad program). I also found that I was able to boot laptops with a built-in mouse touchpad and use use the mouse with no problems with the mouse type set to PS2 in mouse.ini. I no longer received the "Abort, retry, or fail" message when booting from a Ghost 2003 boot CD that had the mouse.ini file in the root directory.

Note: you can see optons for the mouse.com program by typing mouse /? at a command prompt. You can use mouse off to remove the mouse driver from memory.

. You can specify the mouse type by using the type option. 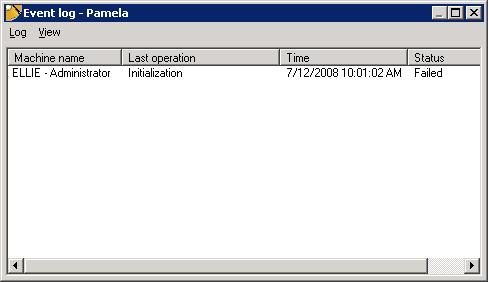 On a system with Symantec Ghost 7.5, I tried starting the Ghost Console, but it hung with the following message:

The "path to executable" value was C:\Program Files\Symantec\Ghost\bin\dbserv.exe. When I checked, I found there was no C:\Program Files\Symantec\Ghost directory. I believe it wasn't recovered when a disk drive problem occurred previously. To correct the problem, I reinstalled Symantec Ghost. I chose the Repair option during the installation. At the end of the repair operation, I saw the error message below:

I didn't see the client systems in the default machine group, so thought I had to add the client systems back into the console. When I tried to reinstall the client software on a system, the installation failed. When I checked the RemoteInstall.log, I saw the reason listed as "Remotely Installed Client is installed on this machine."

To resolve the problem I restored the privkey.crt, pubkey.crt, and C:\Program Files\Symantec\Ghost directory from a Ghost backup I had from some time ago.

To backup those files and that directory or restore over them, you should close the Ghost Console, if you have it open, and stop the running Ghost services. You can stop the Ghost services by clicking on Start, then selecting Run and typing the following command and hitting Enter. You need to include the double quotes where shown below.

I then restored the privkey.crt, pubkey.crt, and C:\Program Files\Symantec\Ghost directory from the backup. Afterwards, I ran the command "c:\program files\symantec\ghost\ngserver.exe" -start to restart the Symantec Ghost services. I then saw the systems in the default machine group I had been using previously for the Ghost backups.

When I attempted to backup the hard drive in an HP laptop with Norton Ghost 2003, I received the following error message:

I tried another Norton Ghost 2003 boot diskette, but had the same results.

I then tried a PartImage Is Not Ghost (PING) boot CD. During the boot process I saw the following:

PING dropped me to a shell prompt, since that was the option I picked for when it completed, without giving me a chance to start the backup. I powered the system off and on and rebooted. I did not see the messages noted above then and I was able to backup the system to an external USB disk drive.

The next night I backed up the system with PING again and, afterwards, tried a Norton Ghost 2003 boot disc with the USB 1.1 drivers provided by Symantec with Ghost 2003.

When I was dropped to a command prompt, though, I saw the following:

After running chkdsk /f on all drives in the system, I started an image backup of a Windows Small Business Server (SBS) 2003 system from a Norton Ghost 2003 boot CD. I was attempting to backup an internal IDE drive to a double-layer DVD in the system's internal DVD writer. When I attempted to backup drive C (the second partition to a double-layer DVD, I got a "File Name ? (546)" error message. The backup aborted shortly after it started with the current file being backed up listed as "0 $MFT".

When I hit enter for "OK", I then received the following error message:

When I hit enter, I saw the following:

I rebooted and hit F8 prior to the system booting from the Ghost boot disc to choose what entries in config.sys and autoexec.bat should be processed. I chose not to execute "Ghost.exe" from autoexec.bat. When I got a command prompt, I entered ghost -fni instead, as suggested by How to troubleshoot the error: "Internal error 36000 . . . ". I then proceeded with the backup of the second partition, excactly as before. This time the backup completed succcessfully.