I encountered a number of problems when trying to get ELOG to run on a Mac OS X 10.5.8 (Leopard) system today.

Apple provides the gcc C compiler for Apple systems. If it isn't already on the system you can download the compiler from Apple's website for free.

My wife noticed while she was posting items for sell on eBay with Turbo Lister 2 today that the checkbox for adding a Gallery Plus picture was being checked automatically. She didn't want an additional fee for this feature and was annoyed that the box was being checked. She pointed out to me that many other people were complaining of the same problem at Turbo Lister adding Gallery Plus to my Listings! When I checked that webpage, though, I found some people stating that the Gallery Plus images were free when sellers posted items for sale in some categories, e.g., collectibles. Someone posted the following from an eBay announcement in 2009:

We are excited to announce that we are making eBay individual pictures, Picture Pack and Gallery Plus free for items listed in the following categories — Collectibles, Art, Pottery & Glass, and Antiques. We are committed to the success of our sellers and to continually improving the overall experience for all of our customers — both buyers and sellers

When I checked an eBay "help" page on Gallery Plus, I found no mention of the above statement, but I did find that information on the link from that page to an eBay fees information page.

When I checked the auction items in Turbo Lister 2 for which she was seeing the box being checked even when she had unchecked it, I found she had designated the category for them items as "collectibles", so I told her she shouldn't see any Gallery Plus fee for those items.

If you have a Fedora 12 or Red Hat 6 (RHEL) or later versions of Linux on a system and would like to install the Google Chrome browser using the YUM package manager, you can do so using the following steps.

Note: You can determine which version of those operating systems or CentOS you are using by examining the contents of /etc/redhat-release.

However, if you are using CentOS 5, you won't be able to install the Chrome browser using the above steps. When I attempted to install the package on a CentOS 5.5 system, I saw a message indicating that version 3.2 of the lsb package was needed:

When I tried updating the lsb package, I saw the following:

I had similar results when I changed the contents of google.repo to try the 32-bit version, instead.

I found lots of other people reporting the same problem with earlier versions of Red Hat Enterprise Linux (RHEL) 5 and versions of Fedora prior to 12. E.g., there are similar reports at How to install google Chrome in RHEL 5. and Add support for RHEL/CentOS for OS compatibility. At the latter problem report webpage, I found a suggestion from andrewrjones that people wanting to use chrome on CentOS check Chris Staite's webpage, Chrome on CentOS where he provides Chromium for CentOS. Chromium is Google's open source alternative to their Chrome browser.

You can download Chromium for CentOS 5 from his website or from this website. Chromium is an open-source browser project behind the Google Chrome browser that aims to build a safer, faster, and more stable way for all users to experience the web.

Once you've downloaded it, you will need to unzip it and untar it. When you extract the contents of the tar file, a chrome directory will be created beneath the current directory. Make that the working directory and run chrome-wrapper.

You will then be asked to choose the search engine you wish to use from Google, Yahoo!, or Bing.

Once you've started Chromium, you can control and customize it, by clicking on the wrench symbol in the upper, right-hand corner of the Chromium window. 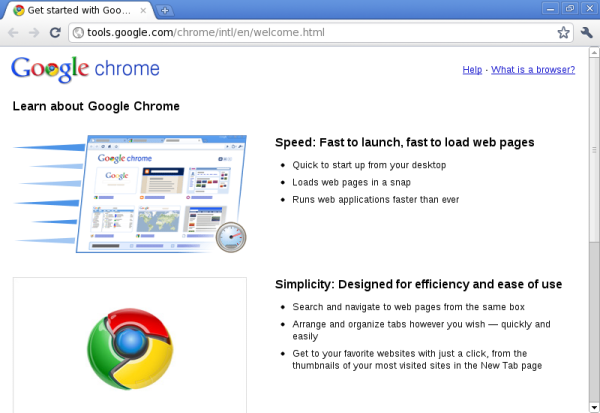 When I ran chrome-wrapper, I received the error message below, but the program ran.

The program that Chris provides is a 32-bit one.

I found a discussion of the problems with Chrome and Chromium as well on CentOS systems at Google chrome for CentOS ?? that indicates Google has no interest in supporting Chrome on CentOS 5. There's also helpful information there on the Chromium software available from Chris Staite's site and how to resolve problems encountered with it on CentOS systems, but, since I have a lot of more pressing things to get done, I decided I couldn't afford to spend any more time troubleshooting issues with Chrome and Chromium on CentOS and just deleted the Chromium software from the system on which I had placed it.