I needed to do some troubleshooting on an HP desktop system running Microsoft Windows 8 that would no longer boot into Windows. The system has three 2 TB drives configured as a RAID 5 array providing 4 TB of storage, but one of the drives had failed. I could boot the system from Linux rescue CDs, but, since I didn't have an appropriate driver to access the drives as a 4 TB RAID array, I couldn't access user files on the system by that method. I could boot into the Windows recovery environment and choose the advanced options, which would allow me to get to a command prompt. 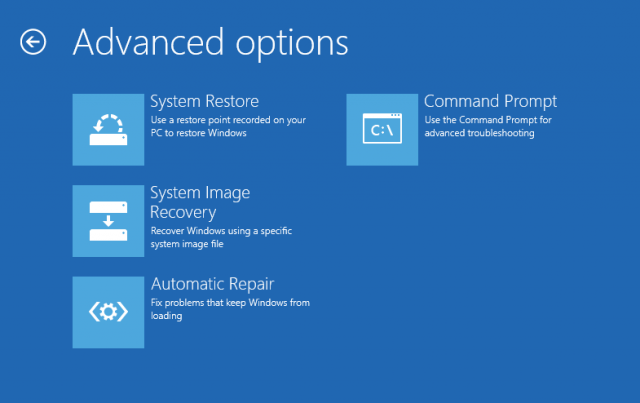 I could then copy files from the drives to an external USB drive using xcopy, but the user had over 900,000 files in her My Documents directory and xcopy only copied about 800,000 of those. I wanted to try another method of copying the files to see if that would be more successful, but there were no other utilities available to me from the command prompt that I thought would be more successful.

I created a boot disc on another Windows 8 system using MustangPEBuilder 2 ADK, which allowed me to boot into a Windows GUI, but without the appropriate driver added I haven't yet been able to access the data in the user's My Documents directory with it. I have been able to add Windows applications, such as IrfanView, but I haven't figured out yet how to get some other applications I want to use added nor a driver that will allow me to access the RAID drives. 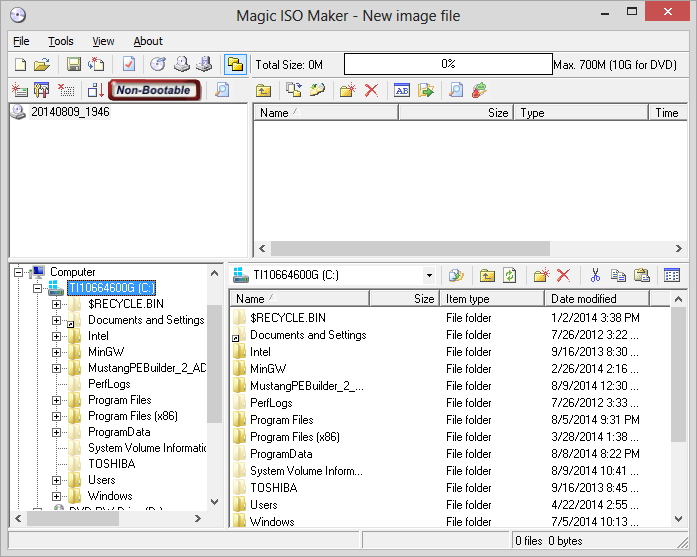 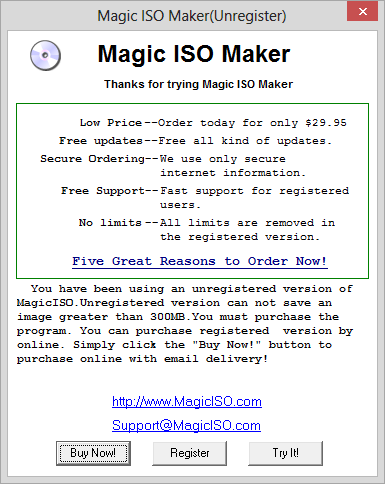 While in someone else's office, I needed to add an HP Color LaserJet CP4025 printer in that office to the list of available printers on my MacBook Pro laptop. I was able to generate a printout of the printer's configuration from its front panel to get its IP address. I then looked for a suitable Postcript Printer Description (PPD) file on the laptop. The PPD files can be found in /Library/Printers/PPDs/Contents/Resources.

The HP LaserJet 4000 Series.gz file seemed appropriate. I then used the command below to add the printer:

The printer then appeared in the list of available printers under System Preferences/Print & Scan and I was able to print to it.

The options for the lpadmin command, which can be used to configure CUPS printers, are listed below:

The text specified with the -D option is the description that I see for the printer when I check Print & Scan under System Preferences. 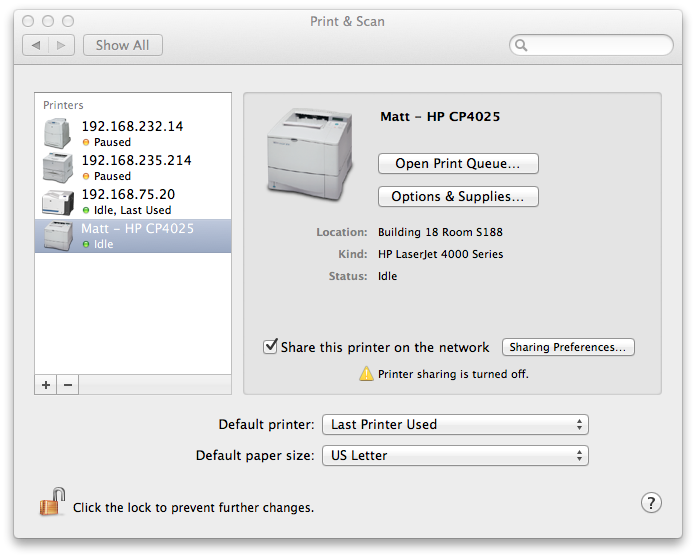 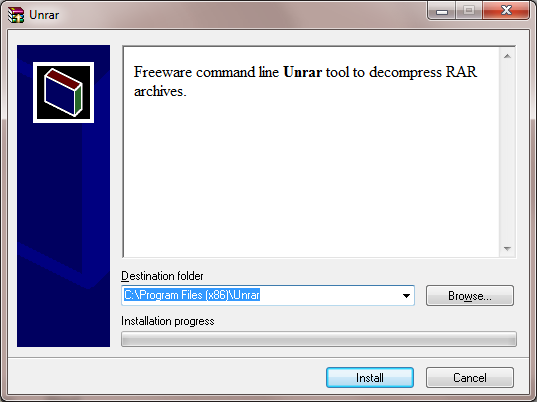 The default installation directory is C:\Program Files(x86)\Unrar. If you don't have access to install files in that directory on a system, you can place it anywhere, e.g. in "My Documents". So you don't need administrator level access to a system to put the utility on a system or run it on a system. There is only the one file, Unrar.exe file that you need. to use the software. 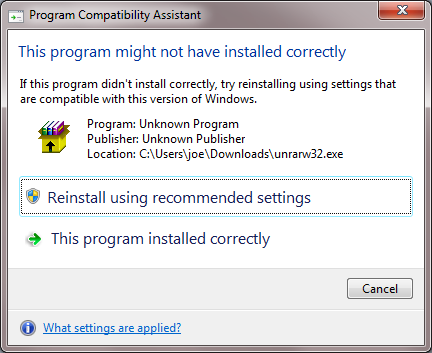 You can see the options availble for the program by typing unrar at a command prompt in the directory in which you extracted unrar.exe.

To extract the contents of a .rar file, use the e argument to unrar followed by the name of the rar file.

The Firefox add-on Session Manager created by Michael Kraft allows you to save a Firefox session at any time. You can save and restore the state of all or only some Firefox windows and tabs. The session data saved includes history, text data, and cookies.

All sessions are stored in the sessions folder inside your profile directory and can be moved around as with any other file. On a Microsoft Windows 8 system, the sessions folder is in %APPDATA%\Mozilla\Firefox\Profiles\profiledir\sessions. You can find the value of %APPDATA% at a command prompt by issuing the command echo %APPDATA%.

The value of the profile beneath the Profiles directory will vary. E.g.:

To get to that folder, simply select "Open Session Folder" in Session Manager's menu (might not work on all OSes), which you can get to in Firefox on Microsoft Windows by using the Alt-T key combination to show the Tools menu, then selecting Session Manager. Session Manager also allows you to reopen the 10 last closed windows and tabs. You do not need to restart Firefox after installing the Session Manager add-on to begin using it.

To save the Firefox session at any time, take the following steps on a Microsoft Windows system (applies to Firefox 31.0 and Session Manager 0.8.1.5):

To load a saved session, go through the same steps to bring up Session Manager, but instead of selecting Save Session select Load Session. You will then see a list of any saved sessions. 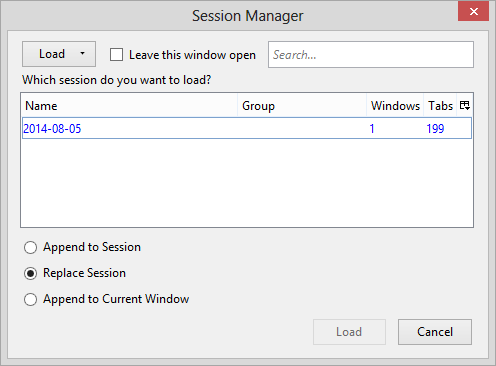 If Firefox crashes or you reboot the system without closing Firefox, you will see a window like the one below when you open Firefox, which will give you the option of restoring Firefox to the state it was in when it crashed or from a prior saved session.

If you wish to search for an entry in a table in a MySQL database that contains a text string, such as "Groot", you can use the LIKE operator. E.g., for a table named chatroommessages with a a field named message, you could search for any occurrences of "Groot" in a message with the following:

The percent signs at the beginning and end of the text indicate that any other text can occur before and after that text, so if a message contained "I am Groot!", it would be selected. The "%" will match any number of characters, including zero characters.

You can search for words or phrases with any other text occurring before or after the text you are seeking:

SELECT `message` FROM `chatroommessages` WHERE `message` LIKE '%only a test%';

If you want to use a wildcard that represents only one character rather than zero or more characters, you can use the underscore character.

The above SQL query would look for all messages that contained any text before "test", followed by any one character, an "r", and then any number of other characters. So the above query would find any of the following:

Hopefully I don't run out of Testor's Dull coat.
my test results were inconclusive.
I am currently a beta tester.

If you need to search for an occurrence of a wildcard character, e.g., you need to find "30%", then you would need to use a backslash, \, as an "escape character" to take away the special meaning of the percent sign in a query.

If you need to create shortcuts from the command line or within a batch file on a Microsoft Windows system, you can use the free XXMkLink program from Pixelab, Inc.. The company also produces free and commercial versions of XXCLONE, for cloning disk drives, and XXCOPY, a file management utility for copying files.

To use XXMkLink, download the zip file and extract XXMKLINK.EXE from within it to an appropriate directory on a hard drive. You can then run that program without any parameters to see options available for it.

At a minimum, the following two arguments are needed to the program to create a shortcut:

spath - path and filename for the shortcut; if you don't add a .lnk at the end of spath, one will be added automatically, since all shortcuts must have a .lnk extension.

opath - path and filename of the object represented by the shortcut, i.e. the location and name for the file or program for which you are creating the shortcut.

E.g., suppose I wanted to create a shortcut on the desktop for the account under which I'm currently logged into the system that points to the WinSCP program, winscp.exe. I could use the following command, if the xxmklink.exe file is in C:\Program Files\Utilities and the winscp.exe program is in c:\program files (x86)\network\SSH\WinSCP\. If I was logged into the JDoe account, the environment variable %USERPROFILE% would equate to C:\Users\JDoe.

If I then hit the Windows key and the "D" key simultaneously, I would then see the WinSCP shortcut on the desktop.

Security information for current version of XXMkLink, which is 1.00

If you need to see a recent history of SQL commands you've run inside phpMyAdmin, you can see recently entered commands by clicking on the SQL icon, which is a box with "SQL" in red letters within it, that occurs just below "phpMyAdmin" at the upper, left-hand side of the phpMyAdmin window.

Once you click on that icon, another small window will pop up which contains a tab labeled SQL history.

Click on that tab to see the recently entered SQL commands

On a Windows 8 system, I had to kill Mustang PEBuilder 2 through the Task Manager due to it hanging while creating an ISO file. When I restarted it and clicked on Create WinPE ISO, I saw the error message below:

When I clicked on OK, the Mustang PEBuilder window closed. The C:\winpe_x86 directory gets created during the process by which Mustang PEBuilder 2 creates the .iso file. The directory and its contents are normally deleted after the ISO file is created. When it has not been deleted and I had previously seen the error message, I was able to delete the C:\winpe_x86 folder and all its contents and restart the process of building an ISO file without a problem. But this time I received "access denied" messages when attempting to delete some of the directories and files within it.

The problem was due to the directories and files being owned by TrustedInstaller. To remedy the problem, I took the following steps:

You should now be able to delete the directory and all subdirectories and files within it.