A client was having problems printing a brochure from Microsoft Publisher to a Savin C3535 copier/printer. She wanted to have the document folded and stapled. Folding and stapling worked for tabloid pages, but not letter-size pages. The company providing support for the Savin 3535 printer suggested the following steps be taken at the server from which the printer was being shared. When that didn't resolve the problem, the tech support person I spoke to suggested deleting the shared printer from the system on which the print job was being generated and then adding the share for the printer again.

To reverse page printing order, i.e. to print the last page of a document first, in Adobe Acrobat 6.0, take the following steps: 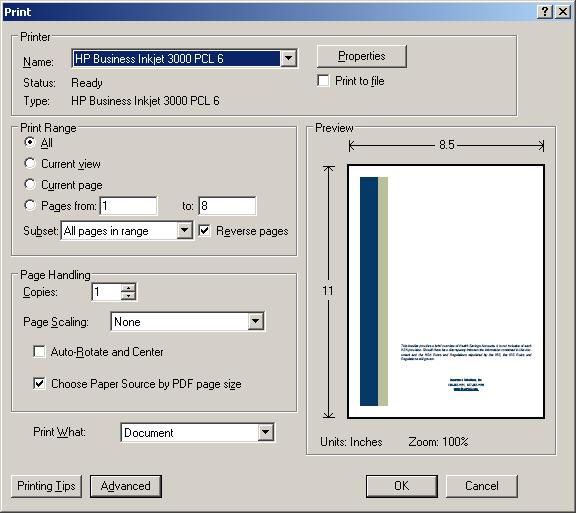 Forwarding Email to Another Exchange User

For an Exchange 2003 server, If you need to forward email to another Exchange user when an employee leaves, take the following steps.

If you need to forward email to an external address instead of an internal Exchange address, see Forwarding an Exchange User's Email to an External Address.

A user reported that she had been unable to receive email from two email addresses. The server processing her incoming email is running sendmail. When I looked in the /var/log/maillog files, where entries related to successful and unssuccessful email delivery attempts for sendmail are stored, for any entries related to one of the email addresses she mentioned, I did not see any, but I saw many entries similar to the following for the domain name used in that email address, which mentioned collect: unexpected close on connection.

I had also been receiving reports from others that sending even small messages sometimes takes a long time. A couple of times when I checked the number of SMTP connections to the server with netstat -a | grep smtp | wc -l, I found over 60 connections from other email servers. Previously, I would find that there would usually be no more than a dozen such connections at any give time. And, if I connected to the SMTP port with telnet mail.example.com 25, I would sometimes see fairly slow responses.

In searching for information on the problem, I found Sendmail ‘collect: premature EOM: unexpected close’ solution . The author was encountering the same problem, which he traced to the use of a defunct DNSBL, relays.ordb.org. Like the author, I have been using relays.ordb for a long time to block incoming spam to the server. In the /etc/mail/sendmail.mc file on the server, I have the following line.

I then took the following steps to update sendmail's configuration information so that it no longer checks the relays.ordb.org blocklist, but uses the AHBL list instead.

According to DNS Blacklist ORDB.org is shutting down the relays.ordb.org DNSBL has been shut down since December 18, 2006. When I tried pinging it, I don't get a response and an nslookup on the name returns an error message as well.

I'm using 5 other blocklists as well, so I checked all of them by pinging them to ensure that no other blocklists that I am using have disappeared. I got responses for all of them, but that just verifies that a system is functioning at the address pinged. To check whether a system is actually functiong as a DNSBL at that address, you should issue use the nslookup, host, or dig commands to query the system using a query in the form 2.0.0.127.blacklist.example.com. All of the commands should result in the address 127.0.0.2 being displayed as the IP address for the query. This is because DNSBL's normally work by storing the IP address of systems to be blocked as reversed mappings so that queries are submitted akin to how you would do a reverse lookup for an in-addr.arpa query (see Chapter 9: Howto Create a DNSBL (DNS Black List), if you wish further details on how DNSBL's work). Since the convention is for DNSBL's to always have the address 127.0.0.2 in the list, querying for that address allows for easy testing. E.g. for AHBL, I could use 2.0.0.127.dnsbl.ahbl.org with nslookup, host, or dig.

For checking whether a particular IP address is in one of the blacklists, you would reverse the address and then put a period and the name of the blacklist after it when issuing an nslookup, host, or dig query. E.g., if I wanted to find out whether the addresses 62.30.35.75 and 62.30.35.76 are in the Composite Blocking List (CBL), I could use the commands below.

From the results, I see that the first address is in the CBL DNSBL, but the second address is not in the blacklist.

Checking other blacklists, aka blocklists, I'm using by querying for the presence of 127.0.0.2 in the lists, I found that opm.blitzed.org is no longer functioning either.

So I removed the line below from /etc/mail/sendmail.mc.

After verifying all of the other blacklists I was using in sendmail.mc still worked, I then rebuilt the sendmail.cf file with the m4 command as above and then restarted sendmail again.

DNS Server Listening on All Addresses

I removed the line listen-on { 127.0.0.1; }; from /etc/named.conf to enable a Solaris server to listen on all IP addresses for the server, not just the loopback address, making it usable as a

I had configured a Solaris 10 system to function as a name server (see Configuring a Solaris System as a DNS Server), but when I rebooted the system it was no longer functioning as a DNS server and since the only name server I had listed in /etc/resolv.conf was the system itself, i.e. its loopback address, I could not resolve system names to IP addresses.

I could run named to start the named daemon again, so that I could resolve names, but I wanted it to start automatically when the system boots. To do so, I created the file /etc/init.d/named with the following lines in the file:

I then changed the group ownership for the file to sys to make it consistent with the other files in that directory and made it executable.

When you reboot, you can check that the service is running with the ps or svcs commands or do an nslookup .

Deleting a User Under Solaris 2.7

To delete a user on a system running Solaris 2.7, run admintool, select the user's account by clicking on it, then click on Edit then Delete. You will be prompted as to whether you really want to delete the user's account and can choose to delete the home directory when the account is deleted. You may have to manually delete a mail file for the user from /var/mail, e.g. rm /var/mail/jsmith.

Too Many Partitions for Norton Ghost

If you want to know the speed at which a system has connected to the LAN, e.g. the system can autonegotiate its speed and you need to know which speed it is using, you can use the mii-tool command to check the status of Ethernet devices in the system.

From the above output from the command on a Linux system, I can see that the Ethernet device, eth0, is not using autonegotiation to determine its speed and is set to 10 Mbs half duplex.

If you want more details for Ethernet devices in the system, you can use -v or --verbose as a parameter to the command.

The device is capable of the following port speeds:

I had been getting reports from users of one domain handled by my Linux email server that email from/to a particular client they deal with had been getting delayed. When I checked the maillog files, I found references to "TLS errors" for that domain. When I discussed the problem with a tech support person for the other company, he said his company is using Exchange with a TLS connector and would prefer my server communicate using TLS with their server. He told me that the security certificate for my server had expired.

I didn't know how to check the expiration date until I found instructions for checking the expiration at Renew SSL certificate in RedHat 9. Sugree, the author of that webpage, suggested running the command openssl x509 -in sendmail.pem -text | grep Not. The instructions were written for a RedHat 9 system. When I ran the command, I saw the following results.

The author then recommended using the command openssl x509 -in sendmail.pem -text | grep Subject. It produced the following results on my server.

When I then checked the expiration of the sendmail.pem certificate, I saw the following.

So now I've got a certificate that is good for another year.

If you want to backup a Dell system with a Broadcom NetXtreme 57xx integrated network controller using Norton Ghost 7.5, then you will need to create a template for that network interface card (NIC) using an NDIS2 driver.