If you wish to download a YouTube video to store locally on your computer, you can do so on a Mac OS X system, and Linux systems, also, using youtuble-dl, a Python script. You can also download a Microsoft Windows exe file from the youtube-dl Download Page. With youtube-dl, you can download videos from YouTube and other sites from a command-line interface (CLI).

For a Mac OS X system, you can obtain the script using the curl utility that is provided with the operating system. You can also use curl on a Linux system, if you have it installed on that system. Alternatively, you can use wget, which isn't provided with the OS X system, but which you may have on a Linux system, if you don't have curl available. To obtain the youtube-dl script using curl on a Mac OS X system, you can open a Terminal window and issue the command sudo curl -L https://yt-dl.org/downloads/latest/youtube-dl -o /usr/local/bin/youtube-dl. That will download the script and place it in the /usr/local/bin directory.

Viewing the message header for an email message in Outlook 2013

If you need to view the message header for an email message received with Microsoft Outlook 2013, you can take the following steps:

Streaming video to a DLNA device with Vuze

DLNA provides a standard for sharing digital media among multimedia devices and Vuze can be used to stream audio and video from a computer to a device that supports the DLNA standard, e.g., a input device for a television (TV).

Specifying an encryption and signing certificate for an account in Outlook

In Microsoft Outlook for Mac 2011 (version 14.6.7), which is part of the Microsoft Office for Mac 2011 office suite, while composing an email message, you can click on Draft on the top menu bar and then select Security to choose to digitally sign and/or encrypt a message to the recipients. 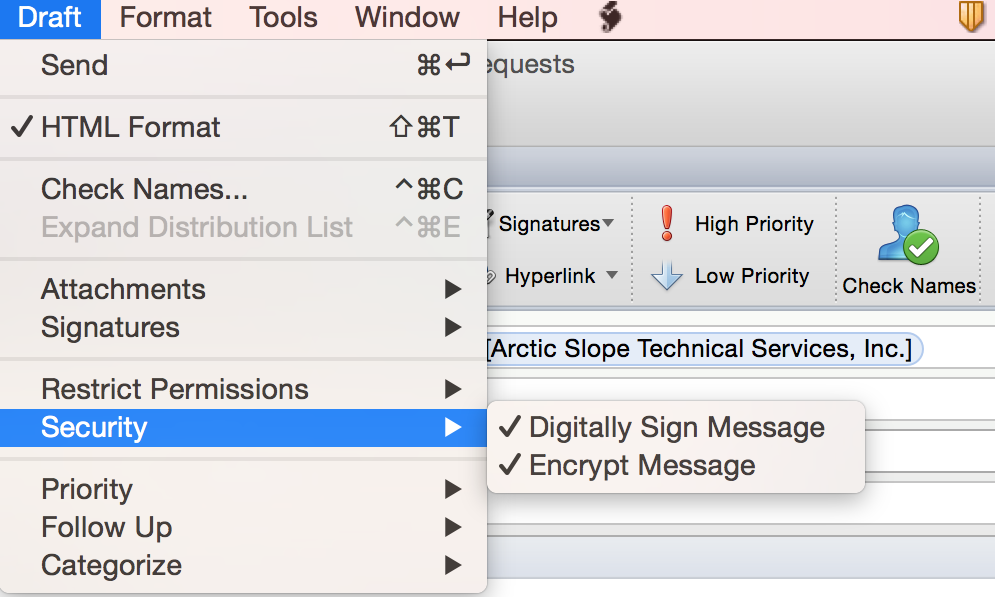 If you don't have a signing certificate installed for the account from which you are sending the email, though, when you click on Send, you will see the message "You must first install a valid signing certificate before you can send a digitally signed message. Do you want to send this message without a digital signature?"

After Microsoft Excel for Mac 2011, which is part of the Microsoft Office for Mac 2011 office suite, crashed on my MacBook Pro laptop running OS X Yosemite (10.10.5), whenever I tried to reopen one of the workbooks I had open at the time of the crash, I would see the message "Microsoft Excel quit unexpectedly."

If I tried opening the workbook with the Apache OpenOffice 4.1.2 on the same system, it displayed "Loading..." and then seemed to get stuck there. However, when I returned to the system about 15 minutes later, the spreadsheet I needed to access was open within the OpenOffice Calc application. All of the sheets within the workbook were accessible and I clicked on File, then chose Save and then saved the file with the default file type of "ODF Spreadsheet (.ods)", so that I would have a readable copy of my data that I could at least open with OpenOffice. I then clicked on File again and this time chose Save As and used a file type of "Microsoft Excel 2003 XML (.xml)". I received a warning that "This document may contain formatting or content that cannot be saved in the Microsoft Excel 2003 XML file format. Do you want to save the document in this format anyway?" I chose "Keep Current Format" to save the spreadsheet in the .xml format.

Microsoft provides a free viewer that runs on Microsoft Windows systems for files created by its Visio diagramming and vector graphics application. But it does not provide a viewer for systems running Apple's OS X operating system. VSD Viewer Pro from LawBox LLC provides a good, low-cost means to view the .vsd and .vsdx files produced by Visio on Mac OS X systems. The developer's webpage for the application is at VSD Viewer Pro for Mac. The current release, VSD Viewer Pro 1.2, is compatible with OS X Mavericks 10.9 or later for systems with a 64-bit processor.

The software can be obtained using the Mac App Store application on OS X systems. The current cost is $4.99 USD.

Unprotecting an Excel workbook when the password is not known

If you are unable to insert new worksheets into an Excel workbook or make other changes to the workbook because it is protected and you don't know the password to unprotect the workbook, if the workbook is in a .xlsx file, you can remove the password by changing the .xlsx file extension to .zip, then extract the contents of the zip file, locate the workbook.xml file within it and remove the password between the double quotes following workbookProtection workbookPassword= using a text editor, then resave the file and recompress the directory produced when you unzipped the zip file, but, on an OS X system, you will need to ensure that the directory and its contents are compressed in the way Excel is expecting, e.g. with the zipdir Pyhon script.

If you have a file with an .xlsx extension on the file name that was last edited by Microsoft Excel, then the file is stored in an Office Open XML (OpenXML) zipped, XML-based file format developed by Microsoft for spreadsheets, charts, presentations and word processing documents. You can change the file extension to .zip by renaming the file. You should then be able to extract the contents of the zip file as you would with any other zip file.

There are different algorithms that can be used for storing files within a zip file that determine the level of compression and speed of production of a zip file. If you are using a Linux or Apple OS X system, you can see choices that are available for compressing files and directories into a zip file from the command line, e.g. from a Terminal window on an OS X system, by looking at the man page for the zip program by issuing the command man zip.

The Python code below will create a zip file from the files and any subdirectories within a specified directory. I.e., it will recursively compress the files within a directory.