Trimming an MP4 Video on a Microsoft Windows 10 system

On a Microsoft Windows 10 system, if you wish to save just a portion of a video that is in MP4 format, you can do so if you are viewing the video in the Movies & TV application, which is the default program for playing videos, by clicking on the pencil icon near the bottom, right side of the window. If you double-click on the file for the video, it will likely open in the Movies & TV app, but if that is not the default program for playing videos, you should be able to open it in the program by right-clicking on the file and choosing Open with then selecting Movies & TV. Once you click on the pencil item in the application, you can then choose Trim which appears beneath Edit in Photos. You should then see white circles at the beginning and end of a white line at the bottom of the video that represents the length of the video. You can drag those white circles to the points in the video that you wish to be the starting and stopping points for the video. E.g., if I had a video that was several hours long, but I only wanted the first hour of the video, I could drag the white circle at the bottom, ride side of the window to the left until I saw 1:00, which represents 1 hour and 0 minutes. Once you have just the portion of the video timeline you want isolated with the white circles, click on Save as, which appears near the top, right side of the window next to an icon that depicts a pencil over a 3 1/2" floppy disk. You can then chose a file name you want for the new copy as the program doesn't change your original file, but makes a copy with just the portion of the original file you opted to save. By default, the program will append "_trim" to the original file name. If it is a large video, you may need to wait a few minutes for the new file to be created from the larger original file.

My wife told me that MediaMonkey (MM) on her PC was taking a long time to start playing songs; it could take 20 seconds to begin playing a song after she double-clicked on it from the Windows Explorer to play the song. She showed the problem to me by having Windows 8 use Media Monkey as the default player for MP3 files. When she clicked on a song, I observed it did take as long as she reported, but when she then switched the default player to Windows Media Player, songs started playing almost immediately when she double-clicked on them. I checked the version of MediaMonkey on her system and found it was 4.1.7.1741. When I checked the MediaMonkey website at MediaMonkey >> Download, I found the current version is 4.1.9.1764. After I downloaded and installed that version, the problem no longer occurred.

If you wish to clear the Windows Media Player (WMP) library, but not delete the music from your system, within the program while viewing your music, hit Ctrl-A to select all entries then right-click and select Delete. When a window opens prompting you as to whether you wish to delete items only from your library or wish to also delete the music files, e.g., MP3 files, from your system, leave "Delete from library only" selected and click on OK. 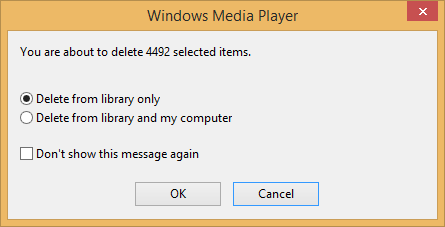 In MediaMonkey, to clear the database, you can click on File then select Clear Database. You will then be prompted to type "YES" to ensure that you didn't inadvertently select to remove all entries from the Media Monkey music library for your account. For a family member who wanted to reinitialize her library, though, I found that after typing "YES" in all capital letters to proceed that a blue circling ring appeared for awhile, but afterwards all of the entries remained visible in the proram. If I clicked on File and selected Close or clicked on the "X" at the upper, right-hand corner of the Media Monkey window, the program would not close. When I closed the program through the Windows Task Manager, reopening it showed all the entries remained. Perhaps, because she had such an extensive music collection, the program may have been taking a long time to clear the database, but the library was never cleared after we performed several attempts to clear it. But there is another way to clear the database and start fresh. You can, instead, delete the Media Monkey database file, MM.DB. After killing the program through the Task Manager, I deleted that file, which, on a Windows 8 system is found at C:\Users\username\AppData\Roaming\MediaMonkey\MM.DB where username is the username for the account. Note: you may have to turn on the display of hidden files, folders, and drives through the Windows Explorer in order to view that location. I also deleted MM.DB-journal, which is found at that location. Then, when she reopened Media Monkey, the library was empty and she was able to add the music she wanted in the library back into it.

MediaMonkey provides the capability to manage a movie/music library, even ones containing over 100,000 files whether they are on a hard drive, CD, DVD, or on other devices on your network. You can organize, browse or search music by genre, artist, year, rating, etc. It supports a variety of audio/video formats such as MP3, AAC (M4A), OGG, WMA, FLAC, MPC, WAV, CDA, AVI, MP4, OGV, MPEG, WMV, M3U, PLS, etc. For codecs your system doesn't already support, you can install a codec pack for it to support additional formats. If you don't have support for the codecs already on the system, it will provide support for the following codecs:

To rip a CD to the music libary stored on your system, i.e., to copy the music from the CD to the hard drive on a Windows sytem, using Windows Media Player 12, take the following steps:

On a Microsoft Windows 7 system, you should then see the name of the album in your music folder under Libraries\Music or C:\Users\Username\Music\, where Username is the name for the account under which you logged into the system, if you look for it using the Windows Explorer. If the album/artist could not be identified by Windows Media Player, you may see an "Unknown artist" folder with an "Unknown album" folder within it. From the Windows Explorer, you can right-click on the folder names and change them, if you wish.

You can play .VOB files with applications such as PowerDVD, VLC media player, and WinDVD.

The installation file uses the Inno Setup installation system. If you have any concerns about the safety of the software you might install, I've provided links to the malware scan reports for the 2009-09-09 version of the Combined Community Codec Pack below. Virustotal is a "service that analyzes suspicious files and facilitates the quick detection of viruses, worms, trojans, and all kinds of malware detected by antivirus engines." VirSCAN provides a similar service. Both sites scan uploaded files with multiple antivirus programs; none found any malware within the codec pack setup file.

When you install the 2009-09-09 version of the codec pack, you can choose from the following components. All will be installed by default unless you deselect them.

If you install all of the above, you will need at least 22.3 MB of free disk space. By default, a "Combined Community Codec Pack" folder will be created beneath the Start Menu with shorcuts for the codec pack.

Under Select Additional Tasks, you also have the following options:

The "general" ones are selected by default, but not the "Haali Media Splitter" options. I selected those as well. You can also choose to open the settings window for the application during the installation. 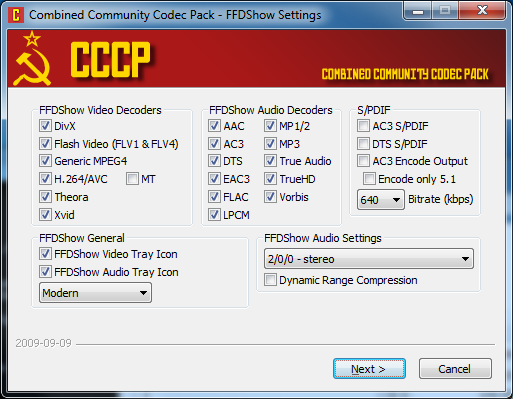 You can also change the file associations for various file types, such as .avi, .mkv, .mp4, and .ogm files. 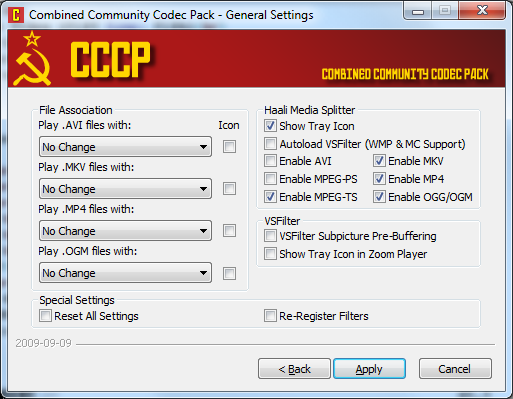 To be able to play those files by just double-clicking on them, you may need to change file associations. For instance, under Windows 7, if you want to play the files with Windows Media Player, you can right-click on a file of one of those types, e.g., an .mkv file, and choose Properties. Then click on the Change button to change the "opens with" application.

When attempting to playing a movie file, such as an AVI, you may find that the audio and/or video doesn't play because of a missing codec. One solution is to use a audio/video player, such as VLC, which has built-in support for a wide variety of audio/video codecs. Or, if you prefer to stick with the media player you are accustomed to, such as Windows Media Player, then you can use a program, such as GSpot to identify the missing codec.

VLC media player is a free cross-platform media player, which runs on Microsoft Windows, Mac OS X, BeOS, Syllable, and GNU/Linux systems. It also runs on BSD and Solaris systems. It is released under a GPL version 2 license.

VLC media player is a highly portable multimedia player for various audio and video formats, such as MPEG-1, MPEG-2, MPEG-4, DivX, mp3, ogg, etc, as well as DVDs, VCDs, and various streaming protocols. It can also be used as a server to stream with extended features, such as video on demand, on the fly transcoding, etc., in unicast or multicast in IPv4 or IPv6 on a high-bandwidth network. It doesn't need any external codec or program to work.

VLC supports the following types of files and, when installed, will make itself the default program for opening these types of files, unless you specify otherwise.